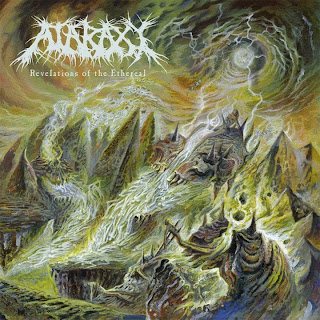 Ataraxy are a young Spanish Death Metal band with a prior sold out EP Curse of the Requiem Mass (Memento Mori 2010) and now their first full-length Revelations of the Ethereal has been cut loose this month. I’ve been listening to this one for two days straight and am completely infected to the point of being ridden with disease from their sheer ferocity which stems from a take on the old Finnish and Swedish Death Metal Scenes (two of my favorites) with their own gruesome touch to stake claim in the cadaverous death metal soil.

As expected given the whole Finnish/Swedish mention the physicality of the sound here is indeed punishing, but unlike other classic death metal styles that may go more for a thrash whiplash or a blackened flagellation in tone and delivery, the punishment inflicted by Ataraxy is that of being buried alive by molten lava = Incinerating, heavy, flesh searing, bone evaporating evil spewing from Hell below. The vocals remind me of a mixture of Paul Speckman (Master, Deathstrike,etc.) and hints of Chuck Schuldiner. As for the rest of the band, they have the stylistic imprints of classic death metal across the board from Swedish beasts, Finnish ghouls, to the U.S.  masters…Ataraxy don’t imitate they emulate Death Metal bestiality so don’t expect anything less than mandatory death metal here!!!!

This release just came out in September and Hells Headbangers has their two other EP’s, Rotten Shit and Curse of the Requiem Mass, so check them out periodically for this to appear in their catalogue otherwise it’s an import at ridiculous Euro prices if you’re in the Americas, but still worth it. If these guys were around in the early 90’s they’d be legends so why not give ‘em that deserved status now as they still annihilate most others out there today anyway?

Posted by Born Without an Anus at 7:41 PM