Kolp – The Outsider (Temple of Torturous) 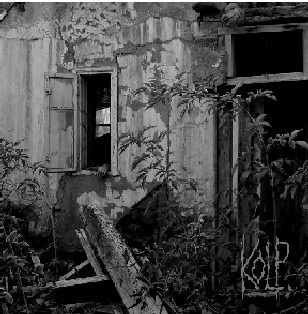 The Outsider is the second full-length from the lesser known Hungarian act Kolp, set to destroy the light of day November 12,2012 with an addicting spin on traditional and experimental black metal that’s impressive to say the least. I just heard this album this morning and have managed to not only keep it in play, but intentionally shun all others for the sake of keeping it in motion simply because it’s that good. Kolp take the A-melodic buzzing guitar sound that is standard for black metal and the black macabre psychedelia of Xasthur, add some muscle under the hood with some diesel motor rhythms that occasionally explode out from beneath the clanging percussion and treble sonic haze, freezing poltergeist vocals, and in the end creating an entire alter dimension beyond reality and the penetration of light.

The sound isn’t new, but the way the album feels definitely IS. Songs like the catchy laidback rhythmic sleeper “Drowning” just keep a rhythmic hook going while the feedback washes back and forth like a tide over it. There’s a nice shrill arpeggio melody present as well, but the dominating presence is that main rhythm that just swings like a pendulum back and forth hypnotically while you feel the swoosh of it’s mass getting heavier with each swing. Eventually most the of the air is sucked out of the room leaving one feeling like an air tight black leather hood was suddenly pulled over head and tightened around the next like a noose, that’s how dark and intense Kolp can feel on one of their more atmospheric endeavors. “Interface Has Dissolved” is another addicting hook delivery with an infectious intro that cascades in time with the calm- angry-calm-angry fluctuations in mood and tempo throughout this songs duration keeping both the turmoil and the addictiveness at full strength.

Kolp create something that avoids cliché and drone, creating something that is dark and heartless, gray and desolate just like the cover art but actually is more like a Charnel house or abandoned mental asylum, where there’s a lot more treachery behind the grim and dead exterior than can be seen or even heard and it will get inside you and it will infiltrate your mind for a while. The songs just stick to your skin like thick humid night air comprised of beings that refuse to cross over.

Links:
http://www.templeoftorturous.com/new/index.php
Posted by Born Without an Anus at 8:53 PM