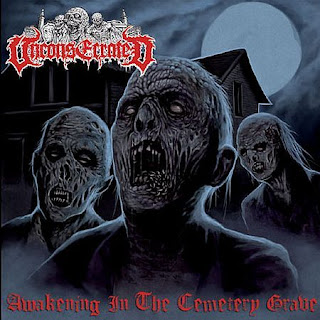 Listening to the bile boiling buzzsaw riff assaults on such atrocities as “Buried in The Crypt” one would expect Unconsecrated to hail from Sweden not Spain, but regardless of where they reside they hit my nerves raw with one of my favorite styles of metal PERIOD!!!!! But to save face, this CD is a compilation of their material starting off with the Slave To the Grave EP (2010), followed by the Dark Awakening Demo (2007), and Unconsecrated Cemetery (2006), not a full album of Swedish DM revival.

The first 5 tracks comprising the Slave to the Grave EP may be Swedish Death Metal styled, but there’s some seriously debilitating shreds and other elements on “Exhumating Profaned Flesh” and some change up in rhythms in “Slave to the Grave” that add a bit of swarming thrash vibes.

With tracks 6-11 taken form the Dark Awakening Demo, much of the modern wave of Swedish tones are subdued and what’s left is a mega cyclone of pure punishing death metal. The tempos on “Path of the Ancient Gods” and “Over the Throne” are breakneck assaults that scream of swarming masses of flesh craving buzzards ready to pick your bones clean while your still alive. On the surface it’s easy to say that it sounds like Dismember, God Macabre, Entrails, and so on…especially when those influences are so obvious, but Unconsecrated does differ quite a bit when you just crank it and enjoy it like you should. “Over the Throne” also has some nice doom licks and rhythms added so you get a nice variety of ups and downs in tempo that just radiate “anthem” and pound you into specks, while “Temple of Darkness” starts with a very unique rhythm and is heavily percussion focused before erupting like an aorta upon puncturing… which just might happen with the thrust of aggression of this bastard crushing in your rib cage.

Tracks 12-18 are from the Unconsecrated Cemetery Demo and are a bit more raw in sound and less Swedish style bass tone driven, and in “Recremated by the Sunlight” there’s more of a circular pull to the rhythms, which seems to come in and out through these last 7 tracks. This last portion of the album really bring in an ugly and dissonance in feel, very classic death metal and very well done for a Demo while the generally sound is that of a maniac wielding a chainsaw and gutting random objects and people in his/her path. These Spaniards never miss a chance to blast the listener whether it be by beat, riff or chord progression, and overall mammoth suffocating decibels that feel as if they’re caving in the room.

Released in conjunction with Dark Blasphemies:

For those in Europe:
http://www.darkblasphemiesrecords.com/
Posted by Born Without an Anus at 4:06 PM