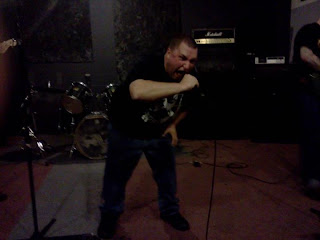 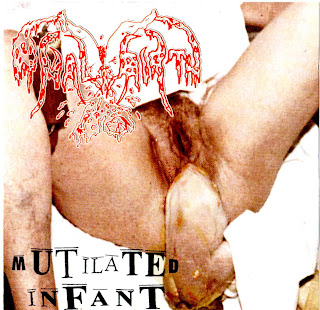 DOTDR: How did liquified Insides get going? (I'm listening to "Piles of charred Corpses" right now)

Adam: After a couple years of drinking my ass off and not doing shit as far as music/noise, I started LIQUIFIED INSIDES to put some new filth out to the sickos who were still left in this scene! Instead of using traditional guitar/bass with the drums/vocals, I decided to use harshnoise by putting FM static through effects and bass boost! I only really did this though because the bass I bought broke and I couldn't get a new one at the time! I kept it going because I really enjoy doing it and I always have someone else do drums for it so that keeps it a little different each time without changing the style! 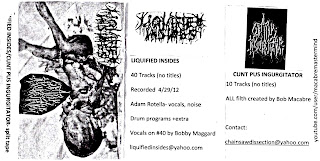 DOTDR: What other projects do you have out there?

Adam: Right now, I have 2 full bands, one is a goregrind band called, MOUNTAIN OF FILTH and a hardcore band called, WORSE THAN EVER! I also do a harshgorenoiseholocaust project, LIQUIFIED INSIDES! 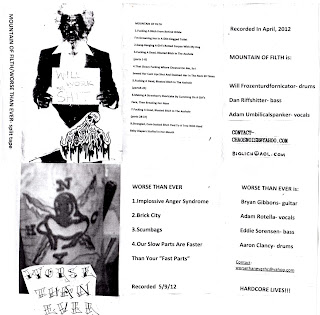 Adam: I'm very flattered by people who say stuff like that and I still can't believe it all, but I am a FAN of this filthy-ass shit FIRST AND FOREMOST and never see myself as being better than anyone (well except scenewhores, wimpouts, sellouts, all-around sacks of shit, and cross-dressing emo-lovers!!!) 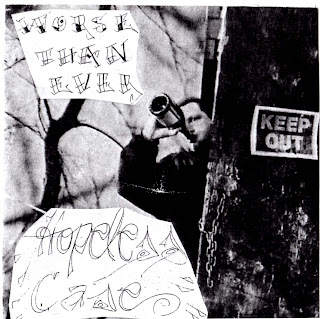 DOTDR: Many say that gorenoise/porngrind/noisecore is crap because of the way it sounds, but although they are entitled to their own opinions, if you really listen to the tapes and acts/bands there's a lot of mixing and placing of sounds and they also really need to be heard as a whole and not song by song. How much thought and work actually does go into your projects and others of those styles?

Adam: Yeah, I don't really give a shit at all about people who hate on this style at all anymore! Actually I really like bad reviews and when people tell me how horrible and shitty it is, the more chaotic, filthy, blasting, vomiting and unbearable to normal human eardrums I want to make this shit! Not much actual "work" goes into what I do, its more passion for the filth, the hatred, violence, and anger mixed with my need to be as fast, chaotic, and abrasive with as much disgusting puking as possible!

DOTDR: In response to that, how have you seen the styles develop now that assholes like you have taken them to near brilliant extremes? 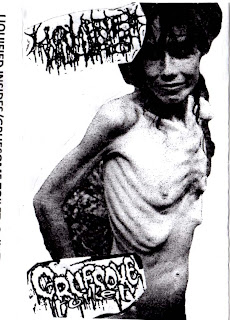 Adam:  I might be an asshole but I don't know about brilliant! HAHAHAHA! Like I've said before, I can't believe still how many gorenoise bands/projects there are now! There are some really sick ones like, UxTxIxFxSxPxCx, VOMITING SHIT, VOMIFLUX DIVISION, CUNT PUS INGURGITATOR, BLACK PUTREFACTION, just about anything Steve Pekari, etc....., but there are a lot of thin shit watered-down versions of it too, but whatever!! I still can't believe it's trendy to do gorenoise! Me and 4 other people liked this shit in the mid to late '90s and I figured it would stay that way!

DOTDR:  As one of the main masterminds behind gorenoise, how exactly did the genre sort of develop?
(I'm a huge experimental, noise/power electronics nut so I hear a lot of that in the style).

Adam:  just wanted to see what noisecore mixed with goregrind sounded like! MEAT SHITS, GODSODOMY, and others were hinting at this style, but I just took it to a whole new chaotic whirlwind level! 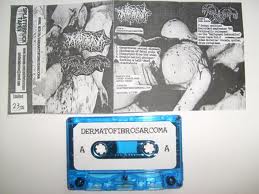 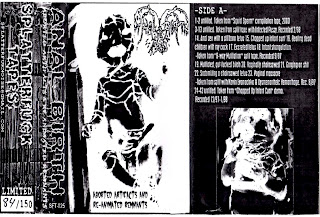 DOTDR:  I feel that there's a lot of love lost in the metal and extreme audio communities, although mostly in metal, as they persistently shove image and retro styles ahead of just doing it the real way by picking up an instrument or object and making noise with it. I know you must have some explicit words to say about that comment so let 'em rip!!!!

Adam: Yeah what you said is really dead on plus there’s too much of a poser mentality in a scene that should have NONE of that at all!! I don't like how certain people act like they are god's gift to labels and should be signed/released/whatever right away and also people who have a little bit of a name for themselves think they're above being on a low-fi release and a couple years ago, they were putting out low-fi releases themselves and now they think they can only be on PRO-DONE shit now!!! FUCK ALL THAT!!!! And don't even get me started with jerkoffs that don't support the TRUE labels/bands/zines/etc.. that are left by not buying/trading shit!! These little pampered shits that just download shit all day fucking long and never buy/trade for the releases they like! I'm not 100% against downloading (even though I'm close to it), if that's the only way to get a hard to find or long out of print release then GO FOR IT!! I'm just sick of the poser scenewhore shit that goes on within gore/grind/noise/sewage death/etc... and it's WAY off the fucking hook!!! And yeah, pick up something and make noise, but only because you love doing it and to find like-minded sickos through creating it!!! Stop showing off to your scenewhore bitch friends and leeching off the TRUE sick fucks!!! Did I ramble enough, Janet??

DOTDR: Definitely!!! I know you, like myself love to vent and with sarcasm and expletives so I figures  “why the hell not include one here? “.  Okay, now with you being an interesting guy and not shy about most things I just have to ask, are there some weird sexual or personal fetishes that you'd like to disclose? (laughs)

DOTDR: Wow!!!! So you're a bootie man? I have a story to really get you squirming then.

Back in my freshman term in college I was at the gym and at the time they had a women's only room so it was easier for me to get free weights in there as women typically, back then, only used the machines. Anyway, the door opened and a family of women came in: the first one was older and had big thighs but nothing massive until she turned sideways and there it was...her ass stretched out about 6 inches STRAIGHT before curving out and then coming back in!!!! You could literally bus tables with it. The next in line was pretty trim but when she turned around her ass seemed even longer then the first. Finally the youngest was thin as a rail and then she turned around and BAM!!!!! it was like a surfboard was being shoplifted in her pants!!!!! You would creamed yourself if you saw that, I still can't get over it...never seen an ass that's narrow but really long and flat like an ironing board. If they got any bigger they'd have to have a separate cart to wheel it around with!!!

Adam: Wish I could've seen that!!! I've seen plenty, but big but well-rounded heartshaped are my favorite, but I've seen some tankasses that knocked me out too!


DOTDR: You have me in tears right now!!! I went out to this great burger and beer place last Friday ( Slaters 50/50)  and every other chick there was a pear bottom and they ALWAYS wear shorts with either the cottage cheese jiggle or the legs are actually solid, I thought of you and snorted beer at John who also had plenty to say about the rears: “Like two raccoons fighting in a burlap sack” was the main one, the other was “Oh my God, she looks like she ate her children”.

Anyway, now for another amusing twist: Who's you favorite serial killer and why? 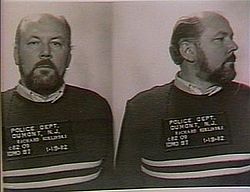 Adam: My favorite serial killer is Richard Kuklinski (aka- The Iceman)!!! He is one of the most ruthless, cold-blooded motherfuckers I ever heard of!!! Just the way he killed people at the drop of a hat in the most horrible of ways with not one ounce of remorse, feeling or anything!!! And he describes it all with either a blank stare or an evil fucking grin on his face!!! He also came up with creatively horrible ways to kill people that I never heard of before!!! Just fucking RUTHLESS to the core!

DOTDR: Ruthless is essential in a psychopath and the Iceman is a greta example of that, but I'm now recently a sucker for Tommy Lynn Sells. The worst killers are not only unemotionally involved in the act before or after, but also transient. Although only convicted on one murder it's estimated that he killed near 70 or more as he burgled houses. He killed men,women, and children...no sexual motive, and he was just brutal!!! Like the Iceman, the best killers are unrelenting and out to "get the job done". 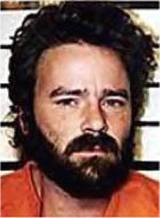 Adam: Toomy Lynn Sells is sick, too!!! I saw him on the "Most Evil" series years ago and you're 100% right about him!

DOTDR: Yeah, I own that series!!! Great stuff, I need to get through the last two discs sometime soon. I'm always up for crazy cannibal stuff though!!! I recently caught a few of the series "Fear Itself" on Netflix and the first episode was about a bayou voodoo cannibal serial killer, wicked stuff!!!! He'd eat the heart and then shapeshift into that person, so far the three episodes that i saw were 50/50 but that one was some serious mindfuck material!!!!
So back to questions, I just got the recent Cunt Pus Ingurgitator from Tim over at VAP and know that Liquified Insides did a split with them as well. Have you heard the CPI yet?

Adam: Yeah, besides the split tape tracks(SICK!!!!!), I also heard the demo cdr of CPI called, "Slaughtered Slut On A Slab" and I think it's one of the sickest fucking things I've ever fucking heard for real!!!!! OVER THE TOP, downtuned, blasting, intestine puking gorefilth!!! Bob Macabre seems to always top himself with the extreme sickness!!! Can't wait for that full-length! 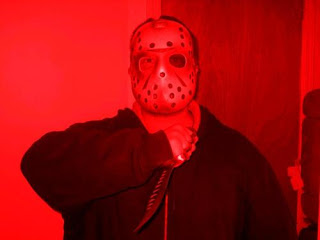 I like the whole idea simply because it takes something already taboo and socially unacceptable and pushes it even further into a real perversion, but personally am not into it.

Adam: Actually, I don't give a fuck about the lesbian shit, its not really not my thing. I can't speak from my own experience too much because my "sex life" for the most part is a fucking joke, but as far as movies go, I'm not into lesbian scenes at all, I much prefer guy on girl(or multiple girls!!!).

I just ordered it from Mr. Macabre a couple days ago, can't wait to hear it! I sent you your tapes finally! Let me know what you think when you get them. Its funny, when I answered my question about the big butt girls, my friend phil tarr sent me a message back right away, "BIG BUTT GIRLS RULE!!" I wonder how he knew I said that!

DOTDR:  Just got your package (haha) and the first thing I dug into was the Liquified Insides/CPI split. I also got to molest my ears with the Mountain of Filth/Worse than Ever split…great stuff!!!!
So that I can get this smut posted I have one final question for you and it won’t be self incriminating to answer like a few others were. Is there anything that you'd like to say in closing?

Adam: Thanks a lot to you Janet for this really cool and interesting as hell interview and your support of my bullshit! I appreciate it! Also, thanks to all the other sickos who have supported the filth over the years and still continue!

Posted by Born Without an Anus at 8:24 PM