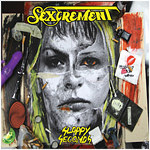 Heavily intoxicated and swinging an axe of crunchy riffs that crush and grind like a mortar and pestle meant solely to press humans into sludge and dust, injecting addicting anthems of coke laced late night Hell raising anthems that will make you spasm like your being electrocuted, experiences like this have sadly been thought to be extinct until now.  One simply cannot listen to Sexcrement and not pay for the extra hour!!!!! It may be a cheap ride, the CD is only a measly $10, but for the distinct bass lines, including some slap action, it’s well worth the trip. Think of Sloppy Seconds as the death metal version of a quality coke buzz for the price of crack, with all of the frills of high-end barrel rolling bass bomb thunder, shredding chords that literally burn as they tear the flesh, some decent leads here and there, killer raspy classic vein death vocals, and a nice sense of humor. Fully loaded with gun in hand and chemical inspiration, anthems like  “Heels Up”, “Heard it Through the Rape Vine”, “Chemical Handcuffs” and the essentially low-brow but well executed “Assisted Living Lapdance”, you’ll be banging more than just your head (i.e. not just the one on top of your shoulders guys).

Sexcrement are the “real-deal” as far as genuine rhythmic and filthy depraved death metal goes, there’s just a lot of groove and “booty” in this stuff that it’s impossible to not get caught up in the storm. These guys are not only original but also shred so PLEASE give them a looking into!!!!! Any legitimate death metal head MUST hear Sexcrement…It’s almost like Gore Gore Girls put to death metal!!!

Definitely check out the Comatose site for the audio links on this one and any link below: