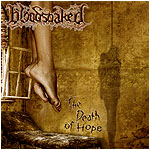 To set the tone I’ll first start off with a description of one of the tracks on the album:

“Grinding your Guts”: Opening with a blistering technical solo for an introduction, this song plummets into death metal slow and growled vocals about corpse mutilation decorated with deliberate and well timed riff chord blast, then comes in the “Grinding your Guts” lyric and the speed picks up a bit and then erupts violently into a plume of artillery fire drumming and lightning speed strumming. There’s this innate and overtly clean and precise way that these guys keep it unapologetically brutal, but there’s still much song structure and clean precision of elements and where/how they are placed that it’s almost surgically technical in that sense. You don’t have to sound like shit to be brutal and old school and Bloodsoaked know that very well. I just cannot bring myself to turn this damn song off; it’s just THAT infectious. Now with all of that said, it’s time to emphasize that this “killing machine” of classic U.S. death metal is a one man operation, Peter Hasslebrack, and has been slaying since 2006.

The Death of Hope is the third release to date and definitely not the last. The main thing that is emphasized by Bloodsoaked is that adolescent aggression and pursuit of creating a brutal assault to the ears with neck snapping intensity but without straining to sound like anything else. Yes, this is not unfamiliar in sound, but it does/will actually stand out to the ears and minds of death metal veteran as being something “fresh” like the flickering jerks of raw nerves exposed as the corpse is skinned immediately post mortem.  The vocals are solid and discernable without losing their aggression or intent, you can hear every utterance of diabolical, heinous mutilation of the human body as if being talked through the process of a killer in a confession. The riffs and some rhythms throttle like a diesel chainsaw ready to sever your torso, and have this great simplistic down tuned tone that physically wrenching your guts a bit…this stuff is pretty heavy, great bass rumble!!!!

If like myself, you enjoy that sound that bands like Obituary, early Death, Malevolent Creation, Cancer, etc. had then you’ll really enjoy Bloodsoaked. All three albums are essential!!!!!