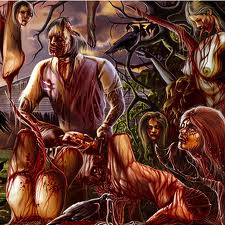 Kraanium are classic death grind inbred with brutal death metal to create something that infuses the obscenities and doomy trudging blunt force assault of Autopsy, unrelenting drumming blast beat power of Napalm Death, with the guttural slaughtering of Malignancy. There’s definitely some doom death riffs and tones in the title track, “Post Mortal Coital Fixation” alongside some pig squeals and a great rhythm progression that creates the anticipation of horrific atrocities and delivers them throughout as the blood and saliva begin to flow gradually until the sheer weight of the thundering percussion and overall downturned rumbling tone crash down upon you like a 2 ton iron beam dropped from a 5 story height.

The vocals are that brutal and distinctive growl that sounds like the vocalist is possessed, but the thing that stands out the most is the groove. Every single track on here is a rhythm ride of adrenalizing rhythmic hooks and hypnotic grooves that’ll keep you straining your neck banging your cranium. All topics covered here spare no ones morality featuring such topics as fecal suffocation with “Coprophagial Asphyxiation”, “Compulsive Mutilation Disorder” talks about self genital mutilation, “Slurping the Vaginal Pus” speaks for itself, and lots of necrophilia, even including pedophilia with  “Stillborn Neurotic Fuck Feast”. If it’s not on here, then it couldn’t be considered genuinely obscene, but Kraanium aren’t as concerned with shock value and bad taste as they are in crafting a battering ram of continual blasts of masterful brutality that easily consume you into there foul world of mental illnesses and sexual deviances so if you’re thinking this is a primarily image oriented band based on the track titles then be prepared for some serious whiplash once you actually hear these guys let ‘er rip.

Kraanium will have you banging your head so hard and fast that if it were recorded in a freeze frame format and played back in detail your head would look like one of those ball and paddle toys.

Fans of Pathology, Autopsy, Malignancy, Condemned, Marrow, and Disgorge will appreciate Kraanium. They are also on tour currently here in the U.S. so check out the Comatose site for dates!!!!