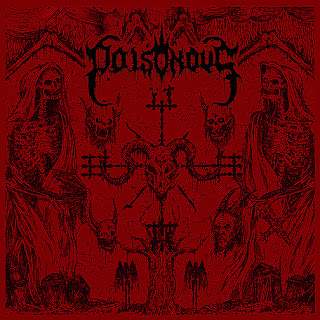 Perdition’s Den is one of those death metal albums form which you know straight from the first tones and seconds of the album that it’s a brutal fucking mess and will remain to reign in blood and septic flesh for it’s entirety!! Chivalry might be dead, but savagery is eternally feeding and spreading with this album.

“Subterranean Rules” opens this album with a doomy and filthy vehement stench of violence and inhumane desires that reminds me of a toxic concoction of Autopsy, Immolation, Morbid Angel, and Incantation. The experience of hearing Poisonous is without doubt intense enough to cause your internal organs to implode from the pressure generated by the depth of the growling demonic throat bursts of vocals that literally extend in a sulfurous caustic vapor after the words of condemnation and hate are uttered, or it’s the doom riffs and extent of down tuning that will literally cause your bowels to tie themselves into knots.

“Worthless Christ” sounds and feels like early Morbid Angel circa Altars of Madness and Blessed are the Sick, but, ironically, putrefied, possessed, and coated with a veil of bloody vomit.

“Under the Blessing of Death” is a charred blackened surge of homicidal tendencies that’ll leave you with blood on your hands once it’s over. There’s a subtle blackened death metal sound to this one as it does it’s diesel powered riffage that comes at you like a shredder of anti-Christian jagged jig saw blades (like the silver sphere in Phantasm that comes at people when they enter the crypt) and drills straight through your forehead.

“Perdition’s Den” makes me think of the filth and bombastic gnarling The Dead Shall Inherit (Baphomet) with the chugging torso sawing riffs and beyond the grave vocals. Some tones are just so low that they really do practically become a natural disaster and those will be heard with Poisonous.

I’m not going to go through each savage song of blaspheme and depraved indifferent brutality so in short: Poisonous lives up to it’s name, they are like Leprosy, an infectious flesh eating filthy dismembering and rotting contagion that brings back the true essence of gut-wrenching morbid filth and bestiality to a saturated death metal era. If you weren’t filthy, vile, and diseased prior to crossing paths with Poisonous, then prepare to be sodomized with a shit-covered ice pick until the tip pokes through your eye socket when/if you do. This is DEATH metal and to hear is to believe!!!!!!

http://metalmaniacs.bigcartel.com/product/poisonous-perdition-s-den
http://www.myspace.com/poisonousdeathmetal
Posted by Born Without an Anus at 5:57 PM