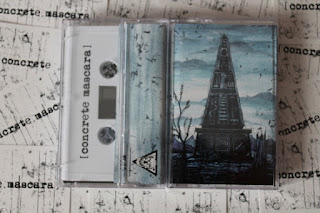 “Burial at the Salt Flats” starts the album off with a heavily muffled collage of screeching tones buried beneath the bass drenched throbbing stomp. Although short, 3:08 in length, it’s dense enough to suffocate you in a cloudy electric storm.

“Ready for Harvest” is a less muffled, bass less, screeching DIY style power electronic /noise experiment gone right. The constant buzzing in and out in the background reminds me of a shorting circuit, it creates this choppy and awkward rhythm that alongside the shrill screeches will keep your bowels clenched as your mind attempts to cope with making sense of this montage. There’s some reminiscence of Gelsominas “Narttukoira” off Sick Seed, or “So Many Ways to Kill a Man” off Dead Body Love’s Maximum Dose where the entire track is screeching with little to no background rhythm, but the fluctuations of the  “on and off “ choppy textures in the sounds really make the track flow. The only difference that specifically weeds out Concrete Mascara is that DIY, Nurse With Wound, choppy, collage, shot live in one take vibe, which really strengthens the track and the artist in comparison to others.

“Statement of Intent” is a thick stew of full-fledged fuzz fury of NTT/Steel Hook Prostheses/Strom.ec worship, but with no love spared for the Cloama/Knurl screech tactics.

“Ruby Red” is one unusual “sore thumb” on this release. It has this bass line underneath a very minimal screeching and static layer that sounds almost like an actual bass at times. The reason this is such a unique track is due to the bass giving it an organic, almost Cabaret Voltaire tint. Don’t get me wrong, this track belongs on the album!!!!! It just takes the listener by surprise with the bass and it’s minimal structure almost like the audio version of a tree without the leaves, just branches bare. Definitely one more score for originality and craft for Concrete Mascara.

“Skin Crawls Cold” is a mega throbbing bass pulse that sounds as if it’s trying to slow to a “screeching” halt, a choppy and bouncing vehicle of heavy steel with a disastrous amount of momentum applying dry worn brakes. “Skin Crawls Cold” is also ironically “dancey” as a combination of  the rhythms of the thuds of bass and the jagged throbbing of the vocals and screeches on top. There’s a lot of manipulation in this 3:23 length excursion that is a huge juxtaposition to the previous “Ruby Red”.

Just released and limited to about 50 copies, the site says 47 available so a few have been set aside for trade or pre-order, so if you really want a tape of vicious and unrelenting power electronics that stands with the like of Strom.ec, Steel Hook Prostheses, Knurl, Cloama…. and still brings something new and sharp to the cutting block then you should move on this one quickly!!!!! WOHRT releases sell fast to the point of almost evaporation.

http://wohrtrecords-store.com/index.php?route=product/product&path=39&product_id=557
Posted by Born Without an Anus at 11:31 AM