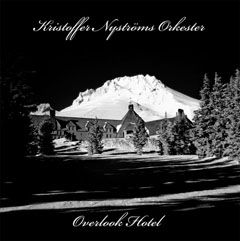 “The Night Corridor” is the perfect Hitchcock style precursor to set oneself up for classic suspense and creepiness, both of which are so fitting for KNO. Starting with a nightmarish classic silver screen Hollywood soundtrack intro, that eventually becomes swallowed in buzzing and gives way into the cyborg arctic electronic atmosphere of “Cleaning Still Houses”, which is somewhat similar to Antigen Shift, especially The Way of the North and some elements of brakeHEAD such as “biTer”.

“Cleaning Still Houses” is an eerie thumping rhythmic groove-athon that still avoids dancefloor cliché tendencies and goes for a sci-fi horror analogue atmosphere, not unlike some Death Factory material, that really pushes ambient and electronic forward. Expect colossal crashing metallic clanks and bass pulses like an iceberg falling apart in the middle of the arctic ocean, on repeat for five minutes, and that’s the intense and chilling experience that you get from “Cleaning Still Houses”.

“Industrial Pale Ale” is a vaporous seven-and-a-half minutes of very minimal electronic sculpting that has a darker and more organic feel on what was done by Wolfgang Voigt in his Gas project. Here one feels as though they are in an abandoned asylum under a narcotic/anti-psychotic influence, only a quarter consciously aware of reality and haunted by the clanking of old metal gurneys and the hollow echoes of wind gusts through the vast empty tattered corridors. Although the actual sounds on this track were recorded in one of the Nogne O breweries, some of the best European beers that I’ve had (their stout has some serious ABV and body which kills most American stouts which lack the density of a true stout), the atmosphere KNO creates is always a perfect storm of industrial versus organic and this creation is yet another example of the skill this duo contains.

“Becoming the Green” continues the vaporous misty fog sounds of “Industrial Pale Ale”, only to be out stomped by the rhythmic penetrating “Vulgalina Fever” with it’s infectious and heavy but very metallic crushing rhythm and whirring like an electric drill amidst some Russian vocal clips thrown in. Now “Vulgalina Fever” is fully into Deutsch Nepal territory and a majestic and haunting industrial soundscape is fully realized.

“It’s a Test” fascinates me the most, not just because it’s really eerie, surreal, and definitely psychotropic, but aside from the amazingly chilling industrial ambient textures that comprise the song, somewhat of a Yen Pox/Stahlwerk 9 combination with some slight martial/neoclassical effect on drumming that echoes in from the battlefield in the distance underneath the fog. It turns out that there are field recordings on here taken live at the Chernobyl nuclear power plant, reactor 4, in this song, which are slightly discernable as the dripping and subtle chimes/clanks/beeps in the background. The song is surreal on it’s own, but reading that puts it in a whole new realm of thought.

“Astronaut 47” closes the album with a Lustmordish hypnotic ambient drone that is as much soothing and organic as it is cosmic and dreamlike.

Five years in the making and VERY cerebral and dreamlike, Overlook Hotel will be a similar experience to portions of The Shining. Every track is it’s own experience and the sum of the parts yields an album that gives you a sense of wandering an endless desert in ones dreams. Available on both CD and vinyl, GET the vinyl!!!!!!! The vinyl contains the warm fuzzy haze tones that are a necessary element to this death industrial/dark ambient masterpiece!!! brakeHEAD was brilliant, but Overlook Hotel eclipses it in comparison.