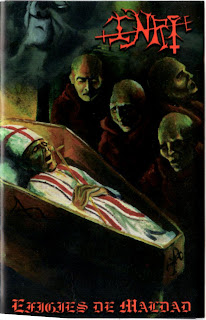 INRI are old school styled death metal from Peru with heavy freight train thrash/death riffs, some doom riffs, and raspy , sometimes blackened, vocals. I’ve heard of these guys before somewhere not too long ago and figured “why the Hell not?” when I saw this $5 tape in the Hells Headbangers webstore and am glad that I did.

Side A opens with the stomping militant pulsing instrumental “El Retonor de la Oscuridad” that burns for a few minutes into the melodic and jagged “Dioses y Demonios” that reminds me of the crunching bulldozer riffing intertwined with great melodic leads of Necrophobic a bit. There’s that raw and dirty texture in the production that works so well with this battalion of down tuned juggernauts that reminds me of a meeting of the best aspects of all old school death metal styles/scenes. I’m already 110% sold on INRI and I’m not even 10 minutes into this annihilation of the senses!!!! I’d honestly expect this to be a Nuclear War Now release, if that’s any indication as to the overall sound on this tape.

“Pontifice Del Sacrificio” is a slammer!!!! The rhythm on this one just yells “WAR”, it’s a constant barrage of pounding riffs and rhythm changes that just dowhat death metal should do and it’s impossible to escape the pull. There’s also an almost a death thrash cyclone ride that leads this horse(myself) to slaughter.

Side 2 opens up with the doomy intro to “Liturgia Del Dolor”, a crushing doom death metal hymn to sacrelege  that turns really bloody and blistering off an on with a nitrous throttle boost of thrash tempo riffing throughout the song creating pure chaos in it’s wake. As with most songs on here, I can’t help but mention that the solos are fucking KILLER and “Liturgia Del Dolor” is yet another fine example of skill meets brutality that INRI do too well.

The gruff iconic Morbid Angel vocals intermixed with almost Satanic black death guitar melodies and rhythms, and of course the sinister, simplistic, yet majestically placed solo really round out “Segrada Profecia”. The solo also occurs in several places throughout the song almost in a way that IT sings the song versus the vocals.

The moment the two live tracks are introduced that end this album, there’s an unmistakable Varathron influence present, especially in the instrumental “El Retorno de la Oscuridad”, the first of the two, but it does continue a bit into “Dioses y Demonios”. Hearing the live versions against the studio versions brings about an interesting contrast between the two versions, especially when going directly from the live to the studio when repeating the album, but it also adds more variation to an already distinct and unique collection of songs and influences.

There are many bands the either try to be and/or wear their influences so blatantly that it becomes straining to hear past them, and then there are those that just ARE and INRI is one of these.