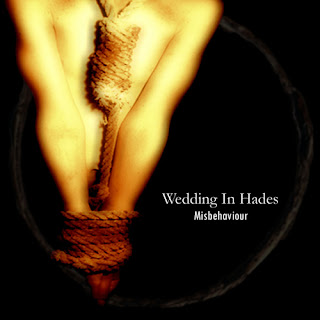 Wedding in Hades is one of these examples of a band that can blend sorrow and heavy abysmal slabs of crushing riffage, some brutality and sinister moods, and melodic (almost gothic in parts) metal with majestic and epic atmospheres without the drama that could kill it all like a mudslide over a blazing fire. Think Warning, Well of Souls, Swallow the Sun, Solitude Aeturnus, Mirror of Deception, Isole, Forskaen, and even Agalloch all mashed up together and that’s the depth and versatility of Wedding In Hades and their approach to epic doom with some death doom leanings.

“Sleeping Beauty”  is basically epic doom right down to the guitar tones rumbling and vibrating through distinct chord strikes, the clean and raspy vocal switheroo, and the rhythm progressions. The unique thing here is that even though we’ve heard these  sounds before, they are packaged and presented differently here.

“Men to the Slaughter” showcases some more uptempo melodic doom with some incredible symphonic background, acoustic passages, and some great metal leads that break up the DOOM but never get too far ahead of the rolling boulder behind them that is doom. The vocals are raspy but the rhythm of the vocals delivery acts almost as a hook, if the tempo were not that of sluggish ball and chain dragging doom it’d be a fist pounding anthem.

“The One to Blame” reminds a bit of the sounds of Altar of Oblivion. On here they bust out pure and heavy doom and metal aesthetics with some serious balls, an almost shredding tone and some stomping rhythms that borderline Hell raising traditional metal and drudging and steady pulsing doom. Lots of great melody and tempo variation that keep this beast cranking and barreling down the road between the “full on” and the disparaging.

I’ve tried very hard to wrap my head around this one well enough to convince others accurately of its greatness, but with something this incredible and intense it’s impossible to do so. If you’re an epic doom nut like myself and have the likes of Solstice, Solitude Aeturnus, Mirror of Deception and so on almost programmed into your brain from years of habitual dedication then you really need to invest in hearing Wedding In Hades. On one last note, another chilling song on here “Almost Living (But Not Dead Yet)” seems to balance crushing doom with traditional doom, especially in the tremolo guitar riffing, and the rhythms are so crisp that it’s impossible avoid being haunted by this one for hours afterward.

Posted by Born Without an Anus at 9:57 PM