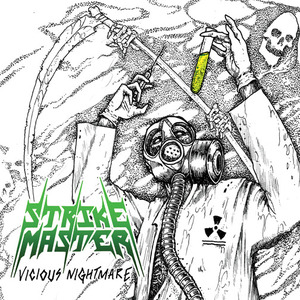 Leave it to the Riddick brothers to come up with a baddass label and cover art!!!! The latest CD’s off MH are serious metal spine snappers that’ll also blister your eardrums, like the uncompromising and old school thrash brutality of Strikemaster!!!! No fucking joke, Strikemaster is not for the weak so if you have any sort of heart condition, anxiety disorder, seizure disorder or are scared of acquiring one from a severe psychological and audible whiplashing than Strikemaster is not for you.

I know that I’ve reviewed and commented on many a current/new thrash band, but with few exceptions like Excrutiator and Gae Bolga, none really feel as though they’re straight outta the mid to late 1980’s like Strikemaster. Somewhere between the merciless and belligerent blunt force attack of “Black Violence” and “Violent Reivindication” I managed to bench about 90lbs today, two sets of 7-8 reps and that was after consistently adding weight and doing full sets, and that’s over half my body weight, that’s how energizing Strikemaster is!!!! It can give you added strength and a thirst for blood and sweat unlike anything else that doesn’t involve narcotics and/or mental illness.

Aside from the obvious unapologetic aggressiveness of Strikemaster’s sound, the mastering is so pristine that you can actually hear and feel the punchy throbbing bass lines on “SBU”, “Black Violence”, “Rabid Abstraction”, and “Prophetic Chemical Death”. The intricacy of the guitar work is up there with legendary, the speed and consistency of the leads and riffs, not to mention some blistering solos that really bring in the old school and polish it up a bit without removing all of the blood stains from decades prior. “Prophetic chemical Death” (on right this moment) really gets you going with it’s thumping and nitro boosted rhythm throttles and the great neck snapper circular pit inducing anthem vibe, but the leads and the play between them and the drums and this scathing solo almost two minutes in just blows my skull cap clean off. The craftsmanship of Strikemaster is almost prog metal quality in terms of complexity and technicality, yet it smashes your cranium down through your torso and out your asshole rather than intrigue your brain with noodling and awkward rhythms.

Listening to Strikemaster gives a new and almost literal means of “getting smashed” as any of the 11 songs on here will whack you upside the head like a sledgehammer with a grudge and brain matter will create a Jackson Pollack right next to what was the place your body was before the event took place.

Fans of Hirax, Forbidden, early Exodus, Overkill MUST have Strikemaster!!!!!

Support metal by supporting the bands and labels!!! If you have cash for ink, beer, and pot, then you have money for buying albums, so put your money where your mouth and image are and keep metal alive.