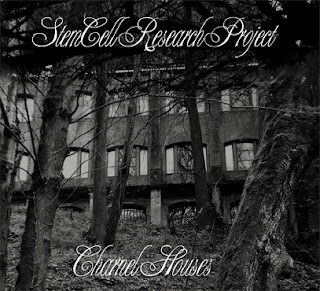 SRP is a new dark/horror ambient project from the diabolical and morose mastermind John Paul Whetzel, also notorious for his suicidal black metal/harsh noise/ambient fusion project Welter in Thy Blood and the murderous industrial grind of Pro-Death.

Charnel Houses accurately depicts what the name implies, dilapidated and abandoned old buildings with a history of inhuman atrocities that took place inside them. It reminds me of the documentary Cropsey and psychological thriller Session 9, both centered around real mental institutions that were shut down due to the torture and squalor that were inflicted upon the patients. The use of constant electronic whirring, many styles of it layered upon each other, with this eerie distorted screeching sound that fades in and out of the mix and what sounds like the distinctive whispering or heavy breathing “hoo hoo haa haa ha...” from Friday the 13th, captures the haunting atmosphere of an old crumbling house full of death and blood. “Cutting the Vessel” even has a doctors voice added in talking about cutting and blood, that is manipulated to where it sounds as though it’s a hallucination that I’m having through a drugged half conscious state while being mutilated alive.

“The Rite of Ossilegium” is a fluid and vaporous incantation that sounds like a voice from a past atrocity calling out as if the event was still taking place and I’m hearing it underwater, then it becomes a more distorted power electronic scream of blood choking anger. The handling of the field recordings, layering of various soft but dense effects to create a heavy fog, and the gradual changes from the quiet and subtle the dramatic as I traverse through “Transcending the Threshold” to the final stage of “Blackened Skeletal Remains” completely hypnotizes me and takes me into a place defined by absolute terror and sadistic violence. “Blackened Skeletal Remains” even has a field recording behind the distorted militaristic voice that could potentially be of a real hospital of institution.

It’s amazing to experience Charnel Houses, as it builds up from a simple and creepy beginning of “Transcending the Threshold” to the massive and dynamic mindfuck of “Blackened Skeletal Remains”. With each listen I pick up new details and horrific images and it never loses its mystery, suspense, or ability to accurately describe the cruel and abhorring nature of mankind. If you really want to experience something that will scare the shit out of someone ill equipped to handle the genuinely depraved and morbid and will definitely play out like a nightmarish supernatural experience that will take your mind to places that make your most gruesome fears seem trivial.