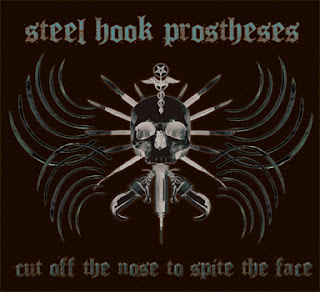 Cut Off the nose to Spite the Face is a compilation/anthology of rare/limited SHP  3 inches: Sadistic Surgery, Cold Embrace of an Iron Lung, Controlled Sense of Decay, and Violent Cutting Motion; an OOP 3LP, Hollow Eyes Behind a Sterile Mask; and a live performance in Dallas, Texas 2008 and at the Firehouse Gallery.

Live in Dallas, Texas (2008):
“Sickness and Plague” is one of those power electronic creations that captures that rolling thunder of distorted bass and heavily effect ridden, but still almost decipherable vocals, that has both a physically warm feeling from the electronic fuzz being generated that’s hypnotic yet the vocals come across like schizophrenic experience.

“Bedsore” is a sonic masterpiece of distortion sculpting and manipulation. The rhythm underneath sounds like machine motor cycling and creates this steady pulsing undertow that still manages to pull you with it even though it’s beneath so many other vibrating components, while the effects on the vocals sound like a scrambling of radio signals with precise and deliberate metallic scraping as opposed to electronic interference. Then to top it all off with this being recorded live, I can’t even imagine how intense the pressure in the room from the engine running sounds and seismic pulses must have been, I bet it could make someone feel as if they had a couple of lead vests resting on their chest.

Violent Cutting Motion 3-inch CD-r (2002):
“Violent Cutting Motion” sounds like an electrical storm, it’s controlled chaos through surgeon-like precision of piecing together analog whirrs, screeching subway rails, rhythmic bass surges, some vocals coming through like a news feed of some disaster that becomes entangled in this intricate web of frequencies and vibrations.

Controlled Sense of Decay 3-inch CD-r (2004):
“Untold Atrocities” sounds like a muffled field recording taken inside a wind tunnel, filtered and tweaked to bring out echoes, details, and then separate the many layers of sounds. It’s ironically droning and fuzzy, but simultaneously foreshadowing something morbid occurring in or around the source and coming closer and closer.

“Trepanation” is one of those iconic power electronic tracks that brings to mind sexual sadism and serial killers. I have no idea why, but it has something to do with the specific sounds used because they always make me think of being in a drugged stupor half conscious in some abandoned warehouse or factory. The constant buzzing rhythms, the machine-like whirring and “sawing” tones in the background really do sound like murder tools. “Forced Plastic Surgery” generates a similar scenario, but with more of the wind tunnel textures and a static saturated voice coming through the electric field, sort of like being put on the dissecting table and hearing a subway echo as it passes above the room.

Sadistic Surgery 3-inch CD-r (2003):
“Catheter (Live in Houston,Texas)” reminds me of the scene in  A Clockwork Orange where Alex is submitted to the electric shock treatment in the straightjacket and helmet full of electrodes.

“Burning Out Their Eyes” reminds me of the sado power electronic act Navicon Torture Technologies. The humming and droning electronic backdrop works almost like an anesthetic as the lighter laser phasing and static layers form a corrosive acid bath over the entire mix. There’s also a feeling of electrocution present that reeks of torture and an added burning sensation.

Cold Embrace of an Iron Lung 3-inch CD-r (2003):
“ Decayed Angel of Mercy” starts out like a storm on the horizon complete with thunder and a slowly closing in sense of impending Hell, it’s the calm before the storm, and what a fucking storm it becomes!!!! Halfway through the tempest brewing the sonic violence and insanity makes its debut as vocals of a lunatic preaching doom and despair to all amidst a sonic storm of static and thunder, the storm has hit and you’re in the eye of it.

“Iron Recluse” is a sonic drone on the surface present and a consistent buzzing that never gives way, but underneath, buried in rubble is elements of the explosion responsible for that rubble as it’s muddied and suffocated into a rhythm beneath the drone.

I was going to cover tracks from each of the components, but it’s getting to be a hearty task. Every tracks is extremely brilliant and the textures are almost tangible like you could run your fingers across them, breathe them in, or be painfully inflicted by them, so trying to cherry pick is relentless. If you are a SHP fanatic or interested in the power electronics realm, you cannot justify NOT having heard any SHP, let alone not owning this piece or it’s original components!!!! This 2xCD is limited to 500 copies so get it quick!!!! Nothing out there that I've ever experienced can capture death and insanity like SHP!!!!!

Posted by Born Without an Anus at 3:27 PM