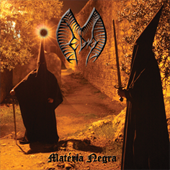 Medo is definitely psychedelic occult and ritualistic black metal, in fact the entire album as a whole is like listening to a long lost soundtrack for an occult LSD induced/influenced horror film from the 60’s or 70’s. There’s definitely even some essence of Argento/Bava felt in the shorter clean spoken ritual tracks like “Medium”, “Por Tras da porta de ferro”, and “O verdugo”; each of which sound like audio clips from scenes in an actual film.

“Trabalho de Magia Negra” and “You Will Never Burn all Witches” feature
gruff and raspy gutteral spoken word incantations and some howling occult moans creating a disturbing and pretty freaked out Acid trip/murder cult vibe that’s unique and sure to intrigue any listener (even if they’re some non-suspecting bystander like people at my work). Also throughout these songs is this psychedelic and esoteric whistling melody in the background that makes the songs play out like the soundtrack to a scene in a supernatural horror film involving a desert, hallucinogenics, sadistic orgies and more than likely zombies and possibly even aliens.

“O Misterio Da Nau Da Morte” continues with some of the sci-fi and acid flare off and on but the spoken Portuguese clean vocals remind me here a bit of Paul Chain and the Italian horror/doom/prog sound/style. Even some of the guitar chords and riffs/chords are almost classic doomy/horror/occult, like the wailing guitar leads toward the end of the track as the vocalist finally goes completely insane.

“Almas Penundas” returns to the raspy and gritty dusty vocals and more traditional black metal chords and structure, but can’t help but to throw in some solid leads and develops a bit of a crude and classic thrash vibe in the process.

Medo is a rare and lucky find, they convey the perfect blend of melodic yet grim and basic black metal, thrash, and even pscyhedelic styles to give one of the most genuine portrayals of psychedelic black metal and capture the classic horror film genre in sound and atmosphere.

Order from:
http://www.war-productions.org/
Posted by Born Without an Anus at 10:08 PM