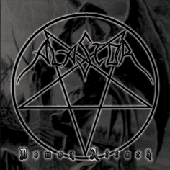 This Portuguese label is one of the coolest finds I’ve had in years!!!!! They either re-issue classic and essential bands like Bleeding Fist’s Devil’s Ferox, or release limited runs of brutal shit like Devastator’s Conjuring Evil, or bring to light the venomous and vulgar sounds from the caverns of the Portuguese metal underground (all aggressive styles too): Medo, Decayed, Alastor…., and as with Bleeding Fist and Devastator, this is another classic 80’s era gut-ripping chainsaw of blackened thrash  that could easily cause Armageddon and at the very same time, block the return of any God/s and the unification of souls with their Earthly shells through potentially “matter” obliterating decibels of classic melodic thrash metal with an absolutely nasty aftertaste of biker speed and brawling energy for those not accustomed to it.

“Necromante” immediately slits the throat with a switchblade razor of an opening guitar shriek up the neck and follows through with tremors of bass drum blasts and bass guitar muscle that tramples the listener in a frenzy of inhuman “Necromante” shouts!!!!!!! There’s also a nice solo in the middle for those who still like their metal in traditional and shredding form. The bass alone on this track when played at the right volume could out “bomb” a rave!!!! I mean, seriously, this band has the right amount of artillery needed to induce a human body to involuntarily explode into a flood of blood and meat like a fire hydrant gone berserk, just listening to “As Portas Do Inferno”, “Fogo e Sangue”, or “Pura Devastacao” alone will convince a mixed jury to vote “guilty”.

Songs like “Hino Funebre” and “Red Hot” tend more toward a brutalized classic metal structure and sound then the rest of the album, thus adding a nice versatility of sound and dynamics. Then we come to the obliterating full-on classic melodic thrash assaults reminding me of say, Razor and Kreator (and Sodom of course, well represented on tracks like: “Through the Gates”, ”Sacrifice to Satan”, “Hell on Earth” and most of the first half of the album actually. I also cannot forget the leads on here, they really do tear through your viscera like a blunt knife through a block of ice making it impossible to escape the experience without suffering any physical damage from the jabbing !!!!! The raspy vox fit the aggression of the stampede that is the band behind them and altogether the two combine as a legitimate Death March of unfathomable force!!!! What the Hell else could you want?

These guys have been doing this since 1988, so definitely show some support and enjoy the mania:
http://www.war-productions.org/cd_releases.html
http://www.myspace.com/alastorportugal
Posted by Born Without an Anus at 10:06 PM