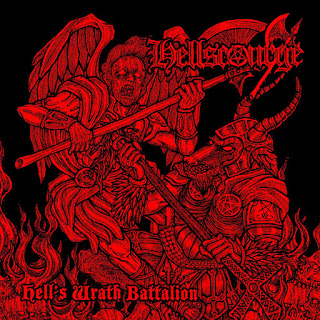 I was sold from the cover and description alone as it was a neon radiating flash of old school black thrash/death annihilation and instantly upon listening it not only delivered, but did so in big heaping steaming sesspools. Recently I picked up the really early Sodom “In the Sign of Evil/Obsessed By Cruelty” and was more devastated and violated by the energy and evil generating from that beast that I thought nothing else was going to top that “Oh Shit!!!!!” moment, then along came Hellscourge.

Early Sodom, early Kreator, Sarcofago, Venom, Celtic frost, Scorched Earth fans must have this one!!!!! It sounds as if it’s a lost recording from the mid 80’s-early 90’s, the recording is raw and garage/demo like giving it a classic and genuine distortion that makes even the crappiest band sound somewhat desirable, but where some rely on fuzz and blowing amps to wow you this band brings in: shredding leads, debilitating rhythms, and full on thrash cyclones that only the truly skilled can pull off. Seriously, the leads are unmistakable and classic, these guys really bring in the full strength of metal in every track and its loud, adrenalizing, and addicting!!!!! Every pounding rhythm and thick chainsaw riff will pulsate through your neural system until you’re nthing more than a brainless zombie feasting on flesh to the vibe of this monster from hell. You do HAVE to have this release.