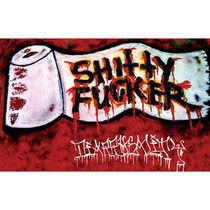 The name alone sold me on this band, sort of like the Butthole Surfers and Anal Cunt…who, speaking of which, can be heard in these 7 scatologically pornographic anthems of brilliant stomping rhythmic sleaze. Pure Fecalphelia with a gritty sludge/grunge/grind/punk feel, the hooks and riffs are as unmistakable as the lyrics and audio clips about being “…hopped up on buttpolish…”, “…when are these kids going to learn to say no to buttpolish…”, a lovely audio clip of a female voice saying “I’m so happy I could shit…” then another friend following with “…you know how I hate the Brown word…”, initially you’re hooked with the opening groove of “Pirate Hooker” directly following the ripping “Jesus Fucks You” and wrenching sludge bomb opener “Putrifornication”.

Being equal parts Eyehategod sludge throttled through colon swamps and stagnant fecal water, black raspy rectal jelly crust vocals reminding me of my beloved Abscess and crust classics, and a serious skill for creating memorable and listenable vulgarity ala Anal Cunt and BHS, listening to Shitty Fucker is like a John Waters anthology done in audio. And why not, Warhol had the Velvet Underground and many muses, so why shouldn’t one of my artistic idols have his own noisy band to sponsor, he had Divine, Edith Massey, Mink Stole, and the guy who made his asshole lip sing “Oooma mowmow” in Pink Flamingos?

If you’re a serious fan of sludge, grind, classic hardcore, crust, heavy stoner tunes and a perverted sense of humor you honestly can’t go wrong here!!!!! The titles may say immature and “flush before opening”, but once you listen to this thing you’ll hear and revel in its awesomeness. It’s only available in hard copy as a Cassette for $4.20, but also as a free download at the link below, so shit or get off this pot!!!!!


Just when I think that I’m finally growing up something like this lands in my lap and I’m back to picking my nose and rubbing it on my moms clothes and giggling that she’s a booger alien while dodging her swings and shrieks or pulling my grandpas finger…ahhh, those were the days!!!!!
Posted by Born Without an Anus at 1:18 PM