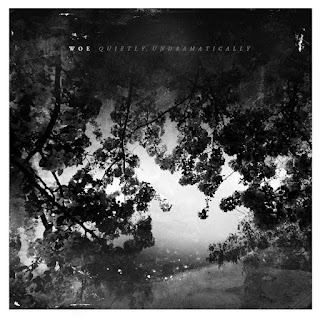 Woe, is right!!!!! This album is an aggressive slab of angst fueled by the scalding of suffering and frustration, it honestly reminds me of other US bands: Nachtmystium (Assassins era), Twlight (current line-up), Ludicra, Embers, Minsk, and Neurosis. It seems as though so many of the tremor inducing new bands want to take: the stripped down distortion, battering ram percussion, and raw aggression of black metal; depressing and ultimately heavy swarms of fury; barbituate induced pseudo-psychedelia, creating a half conscious somnial sort of atmosphere; classic crust rhythms and influence, and pull from those influences to create the devastating intensity of some of their forebears. Needless to say, the album title is ironic as this is anything but quiet and undramatic!

It’s bands like Woe and the ones mentioned above that make todays pool of talent one of the best ever because the few that strive to do something legit and right really have a lot of foundation to pull from: crust/hardcore/psychedelic (new and old)/industrial/black metal/ doom/death metal/grind/thrash/ambient/jazz……
The true mark of a badass band/artist to me is that they do one of two things: something solid and classic, but still stands as a worthy addition to that genre/style; pull influences from all over the spectrum of awesome sounds and execute it well, as does Woe. Melodic, catchy, stomping, pounding, melody, aggressive fusing black metal with crust and some sludge doom psychedelia, you won’t be disappointed with Woe.

I definitely hear a lot of the Minsk/Twlight/Nachtmystium influence on this album so if you dig those sounds you’ll be wanting to embark on this listening experience. I’ve been listening to music all day regardless of my mood to at least get an idea of what some of the massive pile of audio coagulating on my “to do list” is and this one was dramatic enough to be that sort of caffeine buzz to relieve my semi coma state and inspire a review. That should say something for the power behind this one, really good pick for Candlelight too. Set for release October 12,2010 and oyu better believe I want to get my offical copy as this one will be on continual play with me for time to come.

Chekc them out at:
http://quietly.woeunholy.com/
Posted by Born Without an Anus at 8:08 PM