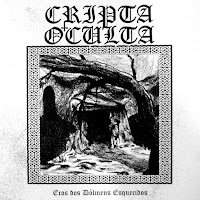 Every fucking time I start to wane form my cryptic/pagan/lo-fi Black Metal sounds some asshole pulls me back into that void with their mesmerizing noise, and in this case it’s Cripta Oculta, a Portuguese band that infuses classic 1st AND 2nd wave Black metal viciousness and raw power with incredible pagan flute and acoustic undertones that only serve to create the mood, unlike many acts that fuse their brimstone fire sounds with the pagan and folk elements, these guys don’t ever turn off the crusty/frosty/thrashy riff riot for them. Instead Cripta Oculta aims to maintain the constant rapid pace marathon of heavy metal anthems and classic angst that makes Hellhammer, Darkthrone stuff so timeless and addictive.

I guess it’s safe to say that where some may argue that Black metal and pagan/atmospheric metal loses its balls, this horde grows them bigger and better. Don’t get me wrong because this stuff is crusty/old school rebellion Black Metal that it doesn’t have any of the dreary and morbid atmospheres and melodies, or that it now lacks the strength of the dense fog atmosphere, this release just somehow manages to balance the two extremes to be catchy, ass-kicking, classic, and yet still as a breath of fresh damp cemetery night air after the first cold spring rain spell. There’s even some amazing solo work done on these lengthy but never tiring tracks. I’m heavily reminded of Blut Aus Nord “Ultima Thulee” and Immortal if that helps a bit more, I still have the Damn B.A.N. “Ultima…” orignal French obscure release with the black and white pen and ink artwork and it always fits my taste. It’s the ferocious melodies, buzzsaw power chords, pummeling drums, and a raw punkish vibe yet very densely and ironically symphonic feel.

This is a total obscure Black Metal gem and absolutely qualifies legitimately for the much abused “cult” moniker. Absolutely essential, haunting, beautiful, yet morose and depressing stuff with an authentic pagan/heathen feel and still bypassing the overdramatisms. I’m a complete perfectionist in most things and music is no exception, I really enjoy the rare and obscure treasure hunt with records/albums and savor the greatest finds for decades. If you’re tired of Striborg dribble and the countless diarrhea of raw and obscure releases, do your mind and ears a favor and pick this one up.

Recommended for fans of: early and current Blut Aus Nord (think of the sounds of “Ultima Thulee” with it’s raw melodies and chilling atmospheres); Immortal (“...Fullmoon Mysticism”) as those are the two main albums that I compulsively also have on frequent play over the years and come straight to mind like a bullet from a barrel directly against my temple. Actually, add in some of Emperor “In the Nightside Eclipse” to it as well perhaps. You get the idea…so get the album!!!!!!

Available at Metalhit.com.
Posted by Born Without an Anus at 7:55 PM