Crowned in Earth - Visions of the Haunted (Shadow Kingdom Records 2010) 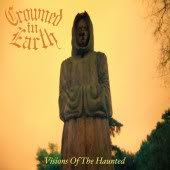 I’ve been waiting for this album ever since Tim at SKR told me about this new act he had picked up last fall. My curiosity was peaked when I found out that this was actually a one-man doom project by this English guy, Kevin Lawry, who had also pulled of an epic solo doom project Silent Winter, and is also involved with English Doom act Kthon, both of which I’d recommend checking out.

I really didn’t know what to expect with this release: classic styled Pentagram/Vitus/Trouble/Revelation Doom; Epic Candlemass/Solitude Aeturnus/Solstice Doom; Evoken/Ahab/Esoteric Funeral doom; or similarities to some of the newest English Doom acts: Serpent Venom and Wounded Kings? My only hints were that there was going to be a session drummer, Darin McClosky of Pale Divine fame, and that there was going to be more classic rock influence. Well, as it turns out it’s more of a hybrid of Pale Divine-like classic bluesy riffs, some cool solo and melodic guitar work, and the keyboard sounds of funeral parlor antics from Italian Prog Doom acts like Abysmal Grief and THC Witchfield. So, in essence it’s exactly what the hell I’d be looking for and was really surprised and pleased with the result.

The five tracks are fairly lengthy in the doom tradition of 7-8 minutes each, but there’s a continual flow and switch between slow eerie passages and some good old riff jam and boogie. The rhythms balance out the slow parts to keep it moving and honestly give it some catchy bits that will stick with you long after listening, just like Sabbath and Pentagram do. No nasal vocals and ridiculous Ozzy impersonations or standard cliché doom riffs, or WAY over-the-top anything, everything is added in just the right amount and it shows in the taste for sure. “ Visions of the Haunted ” is a very solid Doom debut from an act to keep a watch out for, and is yet another great release from Shadow Kingdom Records. Massive kudos Kevin, you pulled this one off as well!!!!!!! True English Doom.
Posted by Born Without an Anus at 9:15 PM