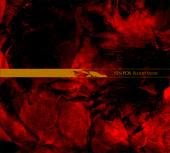 Whizzing and humming sounds entrance you as they slowly render you incapable of turning back.
You can almost make out familiar sounds, but not enough to save you as you go deeper and traverse into the rabbithole of your subconsciousness. Not too far into the journey you begin to ask yourself, "What do I hear approaching?". You wonder, is it wind streaming through the concrete cavern in which you currently wander ? Could it be trains pulling into a station with the screeching of the brakes and the echoes in the hollow tunnels of motion and the traffic of life around you? Make no mistake, there MUST be something in the near distance, but by now even the near distance is too far from where you're at to bring you out of the trance.

Imagine sleep walking in a subway tunnel, along the tracks where the trains no longer run, but you can still hear them and feel the vibrations as they approach your location along their old abandoned route. The only catch is that they never arrive, yet you sense them as if they were streamlining right toward you from well within the damp and murky void that you are venturing into. You begin to imagine that there are people around you as you head toward this dim light at, what you imagaine, is the end of the track, but there aren’t any, no one is there nor will they ever be except you. You continue to wander aimlessly through the tunnels as you see that mirage of faint green and yellow light peer around the winding tunnels illuminating your maze, but will never lead you out. The sound and feel of motion surrounds you, the presence of human and machine is felt, but neither one is really there. Completely unaware of your altered reality you will continue to pursue your route through this labyrinth of soundscapes and meditative states. You will continue on this trek, unconscious and unaware as the sounds resonate in your mind and encompass you until you eventually come out of your somnial experience to realize that it WAS, in fact, only a dream. That’s the power Yen Pox, resonating and genuinely surreal audio for the expedition through your own mind where your experience is only your own.

Warning: Contents may cause the listener to accidentally slip out of consciousness at any given time during the listening. Do not operate heavy machinery while under the influence. Use of mind altering substances while listening to this album may cause the user to become delusional. Contents may induce a hypnotic state. Take caution when using this product as it may cause hallucinations and stimulate an overactive imagination. Those with mental illnesses such as Schizophrenia, paranoia, and various froms of psychosis are especially susceptible to irreversible effects. Indeed this is some fathomless and epic music.
Posted by Born Without an Anus at 9:18 AM