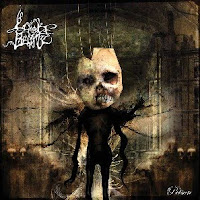 Attention: all assholes that think/thought that symphonic means “For Pussies”, this album along with acts like Hellveto are reinventing the style by giving it a true demonic possession that nothing can exorcise. I would really have to say that this release not only towers over others in that style but is even one for those of us who really enjoy the neo-classical/black ambient/ martial/ black-folk stuff. Honestly, it’s not everyday that something comes my way that is so intense that it busts my jaw open so and I have to review it ASAP before the shock wears off and I lose my initial thoughts on the album. I’ve been hearing about this USBM project for some time now and expected something along these lines, but not being this brilliantly evil and haunting of a BM soundtrack to an occult symphony of horrors and pure depression. I’m thrown off, but not disappointed as this is some wicked shit.

If there was one album that I’ve heard in a few years that screams out “Soundtrack to old silent horror films” this would be the one, and that’s a long list to top. Poison is not an album to go into with any expectations; it’s a soundtrack to a weird dream, a “Little shop of Horrors”, a tragic tale of loneliness and even victory, only to be experienced, and not just heard. It reminds me of the original Nosferatu, Vampyr, and The Cabinet of Dr. Caligari films, where a monster is resurrected in the night and reigns terror over the villagers through nightmares and murders. Not quite a symphony for the depraved but is definitely sinister and essential for those who like the real sound of darkness and mystery. Highly recommended for fans of: Velvet Cacoon, Gnaw Their Tongues, Alcest, Caina, Hellveto, Blood of the Black Owl, Summoning, Gravsahl, Brown Jenkins, Ebonillumini, Finnr’s Cane; but I’d say that anyone into: Steinklang/Ahnstern releases, Cold Meat Industry, Tesco, Old Europa Café, Soleil Moon, Cold Spring, and the War Office Propaganda labels will definitely appreciate this one.


The sound coming from this album is so cold at times that it will freeze your blood in an instant, then it proceeds to put you into a state of hypothermia, that’s the level of dynamics here. If it’s not the piano on “Leaving the Watership Down”, or the presence of female ethereal vocals buried within the violins and distorted guitar on “Harlow’s Vertical Chamber Apparatus”, it’s the sound of something haunting within the mix that really brings this album together. There’s even some raw BM aggression that stirs within and becomes violent and manifested on “ No Quarter at the Somme”. The sound here is HUGE, actually MASSIVE, so much that you’d swear this was a real orchestra, and each track flows perfectly into the next without any interruption. The musicianship, production, composition, atmosphere, and experience are perfect. I will almost guarantee that this is an album that not too many will have ever heard before.
Posted by Born Without an Anus at 11:21 AM