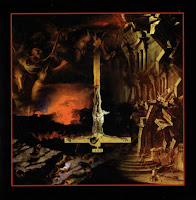 I have to start out by saying “ Holy Fucking Shit…this is some angry and vulgar stuff !!!!!, but the more profane the better, in my honest and disturbed opinion. I scored this one up in LA last month and couldn’t resist reviewing it for the sheer blasphemy and hatred that lies within this web of noise. Here’s the next form of audio inspiration to encourage me to delve into my twisted taste of the depraved and morally toxic. Just when you thought that bands couldn’t conjure up any more intense hate, be any more lewd and bitter, blasphemous and horrid, and above all else kick massive ass, here comes another one to prove that the well of hatred has not run dry, you just have to dig deeper and eventually you will strike the riches of Hell as these guys have.

This is the sound of being beaten to death, the hatred fumes from the speakers unleashing the stench of the Antichrist and its rotting bowels. Low-end profanity of the purest form of audio obscenity lies within these mega- low end rumbles of doom heavy lead riffs, some slow and pulsing, other Blitzkrieg Mother Fucking storm trooper fast coming at you. I’ve said this in reviews before, but have to say it again, this is a soundtrack to killing someone with your bare hands: crowbar to the skull, solid wood slugger to the temples, spine pulverizing, blunt force adrenaline fueled aggression infused with agony and despair and a genuine 100% Kosher disgust with anything holy and sacred. Don’t blame the band if you start to piss on the altar and vomit in the holy water.

The tempos and rhythms run through you as you begin to holler obscenities until your lungs burst and throat melts and then you begin to bash in and break everything you can in a violent frenzy. The legendary Profanatica deliver once again, a massive act of defecation on anything beautiful and hallowed, raise your pint glass and belch as you chug to rejoice in the violation of the inviolable. If you love filth as much as I do and expect your music to be as immoral and debauched as I do at times, then pick this up and rather than “love they neighbor”, “Piss upon him instead”. AAAAHHH, that felt good!!!!
Posted by Born Without an Anus at 10:53 AM