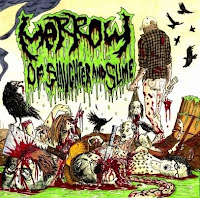 Here I am again presenting to you the best of the scum that floats to the top of the sewage pot of audio grime and disease (in other words the best stuff there is). Recently I’ve been receiving tons of amazing audio from artists and labels (including HPGD), and this band from Baltimore is one that leaves your ears bleeding and your larynx dangling out of what once was your throat. Bringing you the sounds of unneutered and feral Death Metal in the classic sense, expect nothing less than to have your senses shocked and awed as this arsenal of gore, classic screeching DM guitars, roaring riffs, and bludgeoning rhythm section saw through you and pummel your remains to dust. Don’t expect “run of the mill” death metal here, the technicality is present and competes with the best and genre defining while bringing to mind some of my current favorites: the Swedish war machine of Nominon, and Finnish export of Sectioned; but also has some of the best production on an EP that I’ve heard in a while, this stuff is well done.

The lyrics are as scathing and ferocious as Kult Ov Azazel on “Destroying the Sacred” but are spewing out the guts of their last victim rather than defiling the holy. The rhythms are a mix of catchy and ripping Thrash Metal, Brutal Death, and leave no gaps or sense of wanting in terms of brutality or low-end executioner style thunder. The slow motion screech as the guitarist slides up and down on the neck gives you that necessary “WRRRRRRRRRRRRR!” that assures you this is Death Metal before getting into shredding mode. I hate to name drop, when many reviewers do it it's wrong and I wind up buying one thing and expecting something different than what I got, plus the measure of a good band is that they sound like themselves and stand on their own which Marrow does and will slaughter anything in its path.

This is Death Metal of the highest caliber, the mega bore that you shove down some assholes throat and blast them into oblivion. Talk about melodic aggression, this EP is essential for anyone in need of a gore infused slugfest by the best that a band can throw out there will be satisfied with this release. An amazing band to watch out for!!!!!
Posted by Born Without an Anus at 10:07 AM