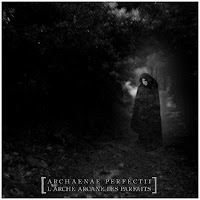 In the last 5-6 years French black metal has been continually raising the bar and dominating the blacker side of metal through: fusing shoe-gaze, classical, ambient, belligerence, abysmal darkness, depression, violent occultism, and weird time-signatures into a concoction of beauty and nihilism with artists such as Deathspell Omega, Alcest, Ameseours, Peste Noire, Diononychus, and so many others. It’s almost ridiculous to expect anything less than unadulterated atmosphere and perfection when it comes to these bands and Celestia definitely keeps its end of the deal here. In my reviewing and collecting I hear so many bands and even though lots of them may be solid and good, and manage not to fall short,but too many just don’t stand out whereas this band does, and boldly.

The similarities in sound to bands such as Alcest, Altar of Plagues, Carrion Wraith, Caina, are present, but there still is something that makes this album unique. The album opens with a classical guitar instrumental piece, “Grandiohsia Obverturae/Vue Du Ciel”, that sets the tone for the album as something sophisticated and beautiful, then the album takes a truly grim downturn on the next track in, but never seems to lose the feel of nature, a dark forest, and the haunting pagan spirit, especially with the gypsy guitar melodies behind the main fuzz on many of the tracks. I don’t want to ramble on about this and bore the hell out of the readers, but have to say that if you’re one of those assholes that thinks that beauty and melody mean “weak” and “pathetic” than you obviously have never heard this stuff and probably should stick to your clone brutal and raw bands and avoid taking the risk of experiencing something that actually is bone-chilling and hair raising without needing to wield a chainsaw or holler "Satan" every two-a-half seconds. It’s artists like Celestia that keep the black metal and atmospheric/pagan/occult spirit alive and strong through progression and real depth. I’m as big a gore and raw blistering hatred fan too, but I believe that evolution is the way to go and need my break from the barebones and brimstone at times too.

This is some of the most intricate and well-executed releases that I have heard recently, and that’s saying a lot with all of the great shit coming out this year. This is music for the early morning, misty and drizzling, foggy, wet cobble-stone streets, old Europa architecture, and the haunting feeling of being the last mortal on Earth surrounded by only the spirits of the dead to keep you company. This will suck your soul out of you for sure, so beware if you’re one of the weak, stupid and pathetic, mentioned above. Absolutely essential and timeless music is contained within this release, not just for black metal and metal listeners, this stuff also is perfect for those who are fans of Ataraxia, Desiderii Marginis, Celstial, Raison D’Etre, Steinklang/Ahnstern releases, Old Europa Café, Soleil Moon, and Cold Spring.
Posted by Born Without an Anus at 1:54 PM