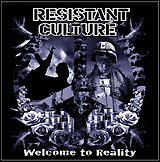 Bringing you the sound of “Urgent tribal grindcrust”, Resistant Culture is one of the few recent truly anarcho-grind bands that follow in the sonic audio wake of Napalm Death and Terrorizer, and also gives a salute to the Discharge /Antisect/Doom crust boys in terms of social criticism and pure audio genius. Based out of L.A. this band is a blunt force strike against society in support of environmental issues and Native American/indigenous rights and cultures, including womens rights against sexual violence. The fact that this grind/death music is so reactive and pyrogenic, it should come with a warning label stating that "upon listening this sound may spontaneously burst into flames".

This band is the perfect slam to your head but also serves a real purpose and grind/death metal is the perfect medium to spread the aggression and bring about some insight into issues that do actually matter, not too mention the appearance of Jesse Pintado (RIP) of ND/Terrorizer on this recording to show his support for the band and their message. For a brutal band the lyrics are clearly audible and the infusion with tribal/Native American chants and even the occasional tribal instruments thrown in behind sound samples of military choppers in the back ground really creates an angst that takes a real message away from the mosh pit, but is undeniably mosh material.

This is some of the best grind/anarcho stuff that I’ve ever heard actually, it’s sophisticated yet completely brutal and throbbing. I’m always for giving the finger to bullshit and flushing the turds that run society through ignorance and greed like the giant hot steaming mass of shit that they are, and this is the band to do it with. Brains and real opinions done with some of the most intense and extreme music styles, blast beats meet the streets and desecrate them. AWESOME!!!!!!!! Please check this band out, they have several releases aside from this one and they are all flawless and equally as gnarly, bands this good need to be heard and definitely felt.

http://www.resistantculture.com/community/home
Posted by Born Without an Anus at 8:26 PM