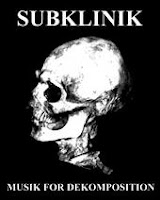 As a long time veteran of the electronic/harsh music scene, this is the type of shit that got me out of metal as a 14 year old delinquent with stuff like:Cabaret Voltaire, Skinny Puppy, Frontline Assembly, Cubanate, and so many more, but that's not even scratching the surface here. Where many artists in the power noise/post industrial arena make purely apocalyptical and chaotic sound experiences, this artist choses to give you the precursor to chaos, the sensation of the end approaching and the moments leading up to the climax, and the desolate feeling of the aftermath. There's some great pulse of a beat running behind this music in the track "Flesh Dekomposition" that gives it the build up and feeling of movement toward the edge, but never pushing you over. The bleak, yet even soothing, hums of electronics surround the listener as one feels as though the worst is over and they are now picking up the pieces and hoping to move on, which is where most of the true horror begins.

There is something haunting and surreal about this music, it's very simple, but well done, as if the artist wants to entrance you into the feeling of being a captive by some psychopath, held bound in a damp and filth ridden cell, and hearing the footsteps of the captor outside the door pacing as you anticipate the next act of torture. The dripping of the wet runoff, the sweat, the darkness, horrid stench of mildew and rusted metal, the clanks of the chains as you writhe with fear, and that Goddamn humming of something in the distance... possibly an electric shortage in the works, or the sound of the next tool to be tested on you being sharpened.

Yes, that's some sick and fucked up stuff right there, but that's my interpretation of it and this is extreme music here so it fits. If you fear themes of death, disorder, chaos, torture, distress, abandonement of hope, you wouldn't be reading this anyway I'm sure, but if this is your first time don't be afraid it's a truly natural and animalistic sensation. Not an experience for the weak and timid, this is the sound of true anticipation of doom and inevitable pain on the horizon.

No Visible Scars is a true DIY label specializing in the real and intense audio experience, and one to absolutely check out if you are into this stuff or would like to be introduced. This is real atmosphere created here, audio art, and sensation, the true measure of the "extreme" and "Cult", "Grim", so fuck all the elitist shit that claims to be such by producing mediocre dribble, this stuff here and anything featured on my site is the real shit folks complete with the smells and foul taste in your mouth if you're not ready for it. Really disturbing and gruesome, yet exquisite stuff.
Posted by Born Without an Anus at 11:03 AM