Labyrinthine - Evoking the Multiverse (Self Release) 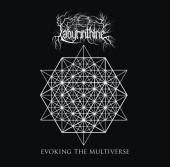 This band is one of the reasons that I continue doing this stuff, another indie self-sufficient artist that creates the most intricate and yet simple atmospheres of symphonic black metal. These guys found me and sent me some tracks for the show while waiting on the pressing to finish on this album to send out, the tracks were incredible and the album as a whole is worth the short wait. I must say it again, that the Satanic themes of nihilism are not only cliche, but are mainly spouted by assholes who know nothing of anything that is Left-Hand path, philosophical, intelligent or even legit, they just clone themselves after an image and shoot their mouths off when in reality they are actually just exercising their sphincter muscles and spouting out feces. Maybe I'm just bitter, but actually it's just that I get sick of bullshit, I fight against it, yet am continually surrounded by it and it's usually the ones preaching to be against it that are the worst offenders and piss me off the most. Music and art is not a pissing contest about image, it's about real feelings, thoughts and actions, and as said in reviews of recent albums by bands such as Kult Ov Azazel and Brown Jenkins, there are bands staying within their realm but doing genuine rebellious music and saluting originality and intelligence. So here's another band along similar lines in going it their own way, finding their own inspiration and doing it on their own terms.

As a science student of 11 years and counting, I've taken my share of math and physics courses and read some insane and abstract stuff on my own, and always wondered why there was so much material there for nihilistic and chaotic themes and yet no one seemed to be using it, until now. The band name alone, plus the cover art and title, shows an interest in the underyings of the universe, the fact that it is continually heading naturally toward disorder, the crazy mysteries contained within, and the mind fuck of debating it all. I had several people tell me that the only way quantum physics and string theory stuff makes sense is if you smoke a joint or drop some LSD and then sit down to work at it, that way you lose the normal sense of reality and "sense" , and can explore the universe by a completely different and natural means.

The actual music here is symphonic,atmospheric black metal, similar to Velvet Cacoon and Wolves in the Throne Room, although a bit more spacey aura as if floating through the vast dimensions of the universe , or that of having on an outer body experience. There are a lot of similarities to other reknowned artists, but this one-man project like Gravsahl, Hellveto, and many other has something that makes it unique as its own. Maybe it doesn't break new ground in sound, but it does expand the listening experience a bit as you traverse through the 6 tracks on the album. For those looking for a genuine listening experience, to be experienced in the dark, or in your mind as you wander through the strangeness of your own daily life and observe the oddities and seemingly empty and almost pointless existence of humans, this is one to check out. It may not be bludgeining and brutal, but is deeply cryptic in its own way and completely awesome. One of my recent top picks.
Posted by Born Without an Anus at 12:26 PM