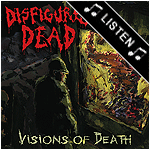 If anyone is unfamiliar with this label and is reading this... then this is your lucky day and welcome to one of the premier labels of the heavy underground. I lucked out and just joined forces with them for my show and reviews and all that I can say is that they have a mercenary of killer titles being released currently, this being one of them. Recently I've been on this old school Death metal kick, started with switching out my usual Death albums for "Scream Bloody Gore" and my Coffins catalog and just went apeshit for the last 3 weeks, including Crust stuff, so where does this album come into the picture? It's absolutely a "Hails" back to early '90's late '80's Death metal ala "Scream Bloody Gore", Malevolent Creation, the Gothenburg sound, some Celtic Frost in spots as well.

The honest sound of Sniveling pukes with attitude spewing out gut-wrenching lyrics over well-crafted riffs and melody. This isn't anywhere near as raw as the stuff it's compared too, which helps because evolution of sound and style has occurred since, but thankfully the attitude is just as much present as before so it remains "true" to it's roots. If you miss the days of full-on garage metal, all the guts, glory, and juvenile F.U. rebellion that we all love and hopefully still live up to...the tapes, bootlegs, scrambling to dub a band in a basement and pass it out at shows days, this band will take you back, but in style. The lyrics are clearly audible, and as ugly as we could hope for, but have a sense of social/political critique infused as if to be an unmistakable middle finger to P.C. society. This stuff is pure old school with a sense of maturity, which I hate to use in a metal review, but it doesn't weaken the aggression or sure gore here, so dig in and be dug into as well by the chainsaw riffs and bludgeoning rhythms. This will split your head clean open upon first listen and you will fester in joyous agony as it rips through you continually like Leatherface and his chainsaw, shredding, gnawing and grinding. Torture of the best kind for us sick fucks that thrive on it!!!!!!
Posted by Born Without an Anus at 1:47 PM