In Silentio Noctis - Through Fragments of Christianity 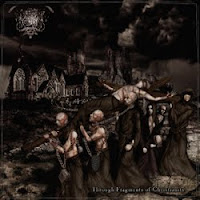 When it comes to the more Goth/Pagan metal I really approach with caution, some if it is awesome and well done, but others are way too overdone and Baroque and I want to puke after the first few skims through the album. None of that is an issue with this release, somehow this band manages to capture the grandiose and symphonic intensity of barbarian times and the Pagan spirit . Honestly, imagine Arcturus' "Sideshow Symphonies" but with Armi Paivinen's female voice converting it into a satanic and epic pagan ritual which she is conducting to ward off the worthless and ignorant Judeo-Christian/modern western culture.

Although classical in many ways, not to mention sophisticated, this band manages to not only fully indulge in the true spirit of the Left-hand Path, but creates the genuine feel of the neo-folk pagan vibe thatyou can actually feel radiating throughout this album. All that and yet this is still an agressive black metal band without compromise. Without the cover art and song titles it isn't clear that this is a Satanic album, black and ethereal at heart, but it IS and a true pagan masterpiece to add. No overdramatic emotional passages, way overdone folk and classical parts that water this down, no yelling "Satan" or his many other names in bloodcurdling screams, but this music is absolutely beautiful and skillfully done. For those that think that only the raw, basic, ugly and grim create Satanic metal, you have no fucking clue what Satanism is, Paganism, or real metal so pull your heads out of your asses, pick this album up and find out what the true occult sounds like.Highly recommended for fans of: Arcturus, Hellveto, Summoning, Windir, Falkenbach, later Bathory, Ataraxia, and also new comers featured on my site like UK based Ebonilumini. Listening to this will catapult you back to the glorious days of the past when rituals, magic, war, feast, and ale ruled as did the strong. By the way, I like the raw,ugly, grim stuff too...