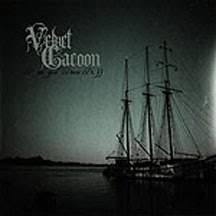 This album is so phenomenal that it fits in with my other reviews tonight. I don't know too much about the controversy surrounding this band, but I do know them from their debut until now and am always gasping at how awesome and atmospheric these guys get. If you like shoe-gaze heavy stuff like Nadja,Wolves in the Throne Room, lo-fi Black Metal like Xasthur, Brown Jenkins, mid-era melodic Burzum, etc. you'll definitely dig this one. Their most incredible album until this one was Genevieve, which was a lot more loud and agressive in riffs and fuzz compared to this one, but no where near the intensity and emotion that is felt on this one and anyone who's heard that one will attest that that's a really high bar to raise.

It's safe to say that the sound is like drowning in an ocean, not violently though, but slowly so that you can feel every tug of the tide and current as you bob and sway back and forth then gradually sink down listening to something like Wolves in the Throne Room coming at you through the water. It really is the perfect soundtrack to a dream where you are dying slowly and peacefully, very surreal, and then suddenly realize that you can wake up and then the album is over. Maybe it's a mercy suicide soundtrack, assisted murder is illegal so you figure that it's up to you to "do it yourself" and make it the most pleasant last moments you could ever have. Sure... that's a bit twisted and depressing, but that's the beauty of it.

You don't have to turn away because it's an alledged "black metal band", if it's not your thing, or if it IS and you can't get over the shoe-gaze description. It's not emo/indie pop shoe-gaze, it's melodic atmospheric HEAVY fuzz and ambient metal (?) that is extremly morbid and haunting. The vocals are behind the mix as always, the echo effects are great, and it really sounds like a tormented spirit crying out from a deep forest through the mist and fog. This is eerie stuff, it'll make any pop trendy pussy run and sleep with the light on, so don't piss yourself in horror over melody and beauty until you actually give this album a spin.

These guys don't have an official website currently so check around online for more info: Full Moon Productions, Starlight Temple Society label pages.
Posted by Born Without an Anus at 10:46 PM