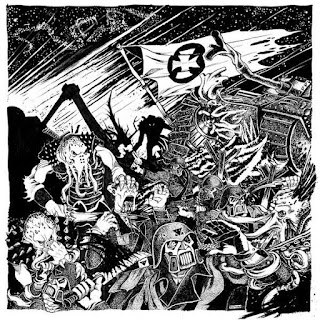 Bill from the No Visible Scars Label noticed some of my reviews and my bio here on Hellride and thought that I would really dig this release, he thought right. Described as a Venom sounding band, but to me that description deosn’t do it justice, these bastards sound like a killer hybrid of old school thrash, fused with old school death via early Morbid Angel/Malevolent Creation and than throw in some doom elements in terms of slow riffs with a Sabbathy/Pentagram 70’s twist. The ideal sound this label is going for, along with the bands they sign, is the old analog sound of chrome cassettes and vinyl from the tape trading heyday of true heavy metal.

These guys hail from Seattle, Washington, home to some killer underground metal acts right now, but have actually been around since ~1995. These guys have toured with the likes of Kult Ov Azazel, Drawn and Quartered, Exhumed, Impaled, Serpents Aeon, Anal Blast…. They are said to draw their sound from early cult thrash and death metal, and that’s a damn good description of it. If you like it old-school raw, but with quality musicianship, addictive rhythms, diversity in tempo,etc. this is an essential to at least hear, but I’d say get the fucker before it disappears like their other releases have.
In fact one of the songs I’m currently listening to (“Out of the Violent Planet) has this amazing horror-surf style tremolo/reverb intro that just goes into this great guitar jam, and then the vokills come in and it just makes you want to jump around and tear things apart. With that being said, there shouldn’t be anyone out there whose mouth isn’t watering and their ears aren’t itching in anticipation of this stuff.
Now I’m listening to “The Knights of the black Cross vs. the Reavers of the Red Death”, it has a great buzzsaw riff throughout sort of like old Darkthrone then fused with Sabbath, then it starts back into that great tremolo picking surf blistering sound again. This album is relentless, get off your ass and get this shit NOW!!!!!! But don’t blame them when you burn the place down in a frenzy while giving it it’s de-virginizing spin. This stuff is hotter than Hell in terms of everything a good metal album could have, and will spit out flames as it plays. The album is on red Chrome cassette and comes with mini LP style artwork, a great silk-screened patch and pin, it makes me feel like a kid again buying music. This is not only a band to watch for, but the NVS label is truly an underground force that will probably keep dropping releases that measure at a 9 on the metal Richter Scale, although if you play these loud enough they might measure enough on the real scale too. For analog recordings this stuff is clearer and more solid sounding than anything digital and is one of many reasons that I’m scrounging up cash to get my analog system together again.
If you dig any of the following and especially the idea of the best elements of each thrown in a stew of noise, you MUST get this one: High on Fire, Kreator, Morbid Angel, Malevolent Creation, Autopsy, Exodus, Venom, Celtic Frost,Slayer, Darkthrone, Mayhem, Immortal, this SOB has it all and many to add. Smoking like a burning Christian corpse at Satans Luau, and reeks of malice and perverted intent!!!!!! Honestly, this thing slams, jams, grooves, kills, slays, bulldozes, stomps….By now you probably get the idea.

This is available on awesome chrome cassette through No Visible Scars, an incredibly cool tape style DIY label, if you miss the fun of old school trading and patches/pins with crazy art, this is your label!!!!!
Posted by Born Without an Anus at 10:42 PM