Ride for Revenge - Wisdom of the Few 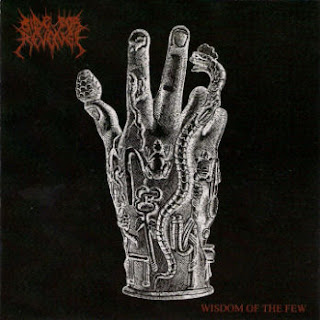 This is another weird lo-fi and just amazing release from the Finnish scene. I figured that having finally posted Skullfuck and Irritate, being that this band consists of similar members and is from the same style it'd be the right time to do so.

This is HEAVY stuff...I have nice studio grade speakers and this thing is so low end that it sounds as though it could strain them. The vocals are above the mix in parts, so it's sort of the opposite of say Wolves in The Throne Room, Blut Aus Nord, Velvet Cacoon, where the vocals are behind or in the mix giving it that faded and atmospheric feel, but it really works well for these guys. I can't describe the vocals, except to say that they are along the lines of deep gutteral death style, but not burpy...maybe sort of closer to old underground death metal vocals. See, that's the thing that makes this stuff so damn good....it reminds you of the things that you love, but also shows variations that make it difficult to say EXACTLY what/who the hell they sound like. The vocals on top of the mix really bring out the music behind it, or maybe it's also the way it's mixed and recorded, either way it's awesome and unique. I would say that they sound very much like Skullfuck, but that's not helping out most of you here.

One of the tracks, "Dungeons of The Original Sin" is almost like weird harsh electronic stuff with pounding bass lines all distorted out in a very marching and simple rhythm pattern, but done with live bass and effects. It really reminds me of stuff like Deatsch Nepal or Brighter Death Now, basically stuff that would be released on Cold Meat Industry,Steinklang, or No Visible Scars to name a few good ones. The vocals range from growling almost spoken, to spoken with a definite Finnish accent that sounds like some of the wicked post industrial/electronic stuff just mentioned.

On tracks like: "Dedicated to Destruction", "No Saviour No Return", "Wisdom of the Few"; the drums are very present and intense. They range from catchy fills and pounding forceful rhythms, to rapid pounding with heavy use of cymbal carshes. The riffs fade in and out with distortion and the music focuses on the drum cymbal work, then comes back in full force and stomping. These guys can use effects!!!!!!! The overall result is a hybrid of lo-fi metal,DIY, early death metal, black metal, electronic,and even sludge. This would make an awesome tape release, which is also available I think. I've heard my share of garage/basement recordings and this is one of the best so far, so if you like those styles of the old DIY days then you'll really be blown over with this stuff.

If you really want to hear something unique and worthy, get this damn album and/or their other one "King of Snakes", both are equally good. If you're a fan of stuff like: sludge, any of the weird electronic stuff mentioned, old death metal and raw atmospheric metal in general, but with more of a slower tempo and definite bass/drum rhythm this is a good choice. Many people claim to like the "underground" and "obscure", but not too many dare to venture there, I do an underground webradio show that features some incredible stuff that people self release and only a few people listen to it enough to get exposed, so indulge in your curiosity and check this stuff out. Because if you're one of the many who think you've heard it all, you definitely haven't until you step into a mound of some of this shit. The stench will linger, as will the stain, but you'll hopefully be so busy rubbing your face in it that you'll overlook those things. This album is a Bestial Burst release.

The band doesn't have an official webpage that I can find so here's a link to hear two of their tracks: http://www.mikseri.net/artists/?id=46592
and check out Bestial Burst at: http://koti.welho.com/zdiamo/ for albums and artists or and contact them directly at: bestialburst@blackmetal.fi for actual purchasing, they are really cool people actually!!!!!
Posted by Born Without an Anus at 10:36 PM