Altar of Oblivion - Sinews of Anguish 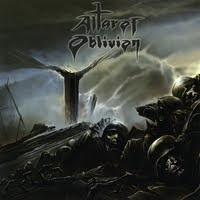 If you haven’t heard this band yet, then get up off your ass now and do so!!!!!!! If any band this year deserves the top award for badass metal album, especially doom, it’s a tough call, but this one is a contender!!!!!!! These guys are yet another amazing find for Shadow Kingdom, Tim, you are one lucky bastard to have signed these guys!!!!!
Now to the review: This is their debut album, they hail from Denmark, and the theme of the album is about WWII. If want your metal epic and brooding about death and mayhem, destruction and the evils of human nature…this is for you. The guitar work is topnotch stuff, reminiscent of the great 80’s metal trailblazers: as heavy as it gets, but at the same time through the fuzz and distortion the melodies are crystal clear and it never sounds dated or retro. The vocalist, Mik “Meister der Tone” is an actual classically trained vocalist, who manages to go from this deep baritone voice up to a good pitch, and then he throws in some harsh vocal bits as well. Think King Diamond style, as in a vocalist who makes it seem as if there are about 4 guys doing it, but it’s never that high. The overall sound is unique, but definitely fits in well with Candlemass/Solitude style epic delivery, but is still without a doubt their very own sound. If you are looking for killer riffing, great leads, intense and awesome rhythm, and one of the best displays of metal talent, look no further. This is an absolute essential album, once you hear it you’ll more than likely agree. Check out their Demo too, “The Shadow Era”, it’s impossible to imagine a demo being that amazing in sound and content, and you get to hear some of these songs in their original form (but nothing aside from production was changed). These guys have so much going for them that it’ll be one hell of an experience to hear what they put out next round. For fans of: Candlemass, Solitude Aeturnus, Elliott’s Keep, Concept of God, Merciful Fate/King Diamond, Bathory, awesome 80’s metal,etc.
Posted by Born Without an Anus at 10:34 PM