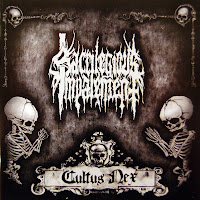 I’m a huge fan of black metal and have heard the many trends come and go, but one thing is for sure… there are many bands/sounds that just get better and better, maybe they age like a “good wine”, or better put, they just become more potent from decay and putrefaction that the sound emanates and lingers like the stench of a well aged corpse, I like the latter myself.

Unfortunately for that description this album doesn’t entirely fit though: first off, it’s not filthy in rough and raw terms, this is seriously skilled and sophisticated shit!!!!!!!; second, this stuff is definitely the epitome of what a good band can do in terms of dark and intense without losing the ass – kicking and brutality behind it. This band hails from Finland, and this album is some of the best in sadistic and powerful metal coming out of anywhere.

These guys show here where bands like Deathspell Omega, Peste Noire, Nachtmystium, and many others, took what was considered to be a stale, and even at times pathetic joke of a style, and made it something that not only rivaled other metal styles in skill and brutality, it also developed and fused to make some of the greatest metal albums and extreme music albums of all time. These guys definitely fall into the category of awesome and essential extreme metal and this release is anything but ignorable.

If you like it loud, blistering, shredding, fueled with hatred and intolerance, merciless and above all else completely offensive to anyone unworthy and pathetic, this is an album for you. No pussies here… this stuff will devour the weak and shit ‘em out as the first track gets halfway through its length. All substance and no bullshit here!!!!!! A must hear and another top on my list for 2010 releases, on Hellridemusic.com in reviews I declared that 2010 was going to be a great year in doom, but apparently the darker/harsher sides of music are also spewing forth some fatal venom this year and I'm anything but complaining about being infected with it.
Posted by Born Without an Anus at 7:46 PM