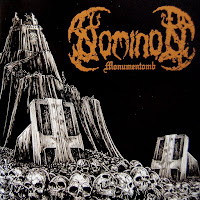 OLD SCHOOL death heads look no further, this is the shit that got us all scrambling around decades ago to the sounds of gore and horror, and mega low end thundering bass lines, riffs and double bass drum bombing squad attacks. Remember the days of Repulsion, Autopsy, Malevolent Creation, early Morbid Angel, and the classic Gothenburg death scene? This is definitely Heavy music for the heavy headbangers, as if the cover art wasn’t awesome enough to sway the curious observer to look further, this review should.

Listening to this over the last two days the main thing that comes to mind is Incantation “Onwards to Golgotha”, the squealing lead guitar shredding the flesh as the drums pound the bones to dust and the heaviosity of the rhythm guitar and bass sound as if an army of the dead and damned are heading to finish off what’s left of your corpse. The track “ Worship” is this one that I’m specifically describing and not only does Incantation come into mind clearly in parts, but in general this is one massive, massive, MASSIVE barrage of metal coming at you. The technicality is not only present, but rather than distract from the feel of pure seething aggression and belligerence, it intensifies it until it becomes a swarm of dropped D hornets buzzing toward you in KILL mode.

“Undead Beast” is an atom smasher of an anthem in it’s own realm completely; This is one to shout back the chorus to as you shove you boot up someone’s ass.

During “Mountain of hate” , the band speeds up the tempo to full throttle and bashes your skull in so hard that you can feel the flesh fall off from the impact. Imagine the drums and riffs so merciless that it embodies the feel of your fist breaking through someone’s skull, but in slow motion replay. This music almost accurately describes the feel of bludgeoning, bashing, smashing, exploding, desecrating… performing any act resulting resulting raw and bone crushing destruction.

Music to kill to for sure, this Swedish warbeast is an absolute band to hear and this new release is ESSENTIAL to any death metal collection, even that of the old and stubborn, usually determined not to hear “New“ bands. This band manages to weave back and forth between brutality through rhythm and tempo , and guitar melody/solo work that's so sharp and clean that it cuts the flesh down to the bone as easily as walking through rotating doors of surgical grade razor blades. So whether it's pounding and throbbing you into oblivion or dicing and fileting you, it's killing the whole time. One of my top picks this year.
Posted by Born Without an Anus at 3:08 PM