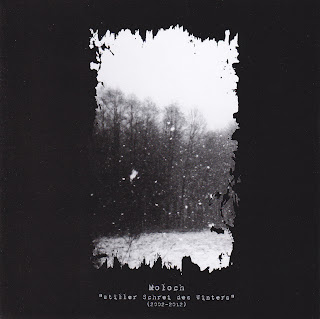 Recently I’ve been back into the cold majestic old ways of black metal with revisitation of my Summoning collection, some Lutomysl, Forteresse, Borgne, and now Moloch.  Moloch is a solo artist from the Ukraine who has garnered a somewhat legendary status over his decade long existence and for good reason too. With the wailing and grisly emotional outbursts of vocals similar to 90’s era Burzum, inundated with nebulous guitar buzz and the explicit tempo kept by the drum machine songs like “Ein Dusterer Winter Kommt I and II” can’t avoid being compulsive for those who genuinely love the classic black metal sound that was atmospheric and bitterly aggressive.

Stiller Schrei Des Winters is yet another collection/compilation of Moloch material, but for those who haven’t picked up every EP,Demo,Split,etc. of his then this one is a solid must have as both an introduction and/or a way of picking up a few unfamiliar and hard to get/OOP tracks spanning his still active career. Sometimes his stuff is extremely ambient and rooted in pagan atmospherics and instrumental passages like the epic 22-minute saga “Abgrund Meinnes Wesens” on his Illusionen Eines Verloren Lebens, but Stiller Schrei… skips over the ambience (with the exception of two of the last few songs) and digs into the howling distorted uproar of emotions and shearing buzz chord songs instead.

Listening to the ghostly symphonic hints on “Meine Heidnisch-Spirituelle Reise Durch Die Walder Der Gefallenen” play out like a soundtrack to a Robert Wiene film (The Hands of Orlac, The Cabinet of Dr. Caligari) blending the supernatural, psychological probing, and gothic horror all in one feral mind fuck of a cocktail. There’s also a great acoustic guitar sounding passage and thunderstorm clips that capture that sense of need for isolation and self-introspection that is a Moloch trait seen in his song titles and felt in his songs moods.

Other songs such as “Ljosalfaheimr” have a mixture of Germanic expressionistic black metal that closely resembles a mixture of Todesstoss and Dutch act Urfaust, maybe with hints of Xasthur  on “Depressive Visionen Eines Sterbenden Horizonts” or the dreary distorted instrumental “Sterben Unter Der Blasse Der Unvermeidlichkeit”.

Last year WOHRT released the cassette version of Der Schein Des Swarzesten Schnees, long sold out since but still available on CD, that made my best of list and was also the release that fully engaged me in Moloch both sound-wise and content-wise. Anything Moloch is an absolute must, but if you’re not much into the ambient then grab the comps, but if you like the cinematic lunacy of:  Xasthur,Todesstoss, 90’s era Burzum, etc. then Moloch is an essential.

I know for a fact (at this moment) Hells Headbangers has a bunch of Moloch releases in stock including this one. Disclaimer: I do not work for HHR in any way, shape, or form officially, aside from giving them my hard earned cash because they have a massive selection in stock and the prices are a steal is about as connected as I am to almost everything (laughs). I write reviews, not ads. Forbidden Records also had a split in stock of his too.

Posted by Born Without an Anus at 9:32 PM