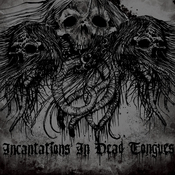 From the label that brought up such intense and horridly bleak and black acts like: the Slaughtered Lamb, Welter in Thy blood, Glass Coffin, Pro-Death, and the In Hoc Signo Vinces compilation; blending the raw and black metal underground with a deep bloody gash of black ambient/death/power electronics that will please any bastardized mind that favors one and/or the other of those audio realms, comes this latest release. From the audio samples on the website alone, I knew I was in for a gracious mindfuck that was long in need of coming, but the final product in its whole is something immaculate and vulgar like the mythological conception of the Christ and really defies expectations.

Deathstench contributes five tracks of elusive and seductive darkness that is as soothing and atmospheric as it is deranged and horror inducing.  “Wives Blood” has one thinking of horror films and a more industrial/Power electronic route as being the foundation of this acts sound, but even in this first track the hidden insanity and smoothness with which they craft these soundscapes there is a comfortable and ease to the listening experience that one gets inhaled before being able to make a prediction on what the Hell this is.

For “Culling the Formless” and “ Bones of the Aborted”, the whirring, rumbling and humming is almost like an electrical storm, but without pre chaos, as each soundwave is controlled  carefully and the dense ambient feel is somewhat reminiscent of  Indigo Larvae/In Slaughter Natives/ Raison D'Etre, where it's almost neo-classical underneath, supernatural, and blasphemous but clouds over your mind like a wet fog instead of screaming into your brain like a scalding hot nail being drilled in by force.

“Transmogrification of the Wyrm-eaten” caught me off guard completely as it rolls like a wave from the speakers, the rhythm is tidal, and the seafoam is warm humming with harsh effects buried deep underneath. It reminds me off trying to listen to a news broadcast on  AM radio of a tragic event, but the broadcast is continuously interrupted by signal issues and feedback breaks and I’m half asleep and the rain is coming down hard with the whooshing of traffic in the streets dulling the radio sounds so only slightly coherent bits of information process through my brain at any given moment. There’s even the use of old telephone dial-up internet noise in the background that’s unusual and really fits the sounds used.

“Putrescence Upon the Altar” is the final contribution for the Deathstench and like much of their sound, it’s this ambient froth that’s soothing and inviting to the listener on the surface but underneath lies the horror and psychological insanity that is sure to either pull you in further or scare the shit out of you as you frantically scramble to turn it off. It’s 15-minutes of psychological warfare that’s only accessible to the minds of the deviant and depraved, anyone normal and unsuited will find it: ignorable, irritating, confusing, offensive, or a combination of them all. In my opinion Deathstench is the achievement of dark ambient meets power electronics perfection and will serve as a standard to which others will be compared to.

Demonologists break up the album by coming in loud and militaristic with “Blood Soaked Frequencies”, as calamity of “controlled” yet chaotic white noise that crashes your brain and ruins the sedative buzz of Deathstench. It literally sounds like a field recording of a tornado hitting that’s been processed and filtered with other sounds like random phone conversations that were tapped into, preferably 911 calls.

“Corpse Orchard” starts out almost celestial and space ambient like, reminding me of Phelios, than suddenly there’s a white noise explosion and you’re being sucked into some high gravity field and hear other worlds and moments in time and you spiral through. Sometimes it’s harsh jumbled screams, other times it’s echoes and sounds of subway tunnels during a high traffic time, other times it’s random bleeps and tones, but the entire experience is that of being sucked into a whirlpool of sound in full motion. It may sound harsh from my description, but the true experience to be had is all in the mind, requires no chemical alterations, and is like sober and natural hallucination. You’ll feel as though you’re moving through some warp although you’re still physically there, sitting, doing what you were doing to begin with, but your mind will think and behave otherwise.

“Testimony submerged in Black” is like blizzard of white noise, enough said. It still feels like being catapulted through some vortex where time slows down and you simply behave as the forces command your body to do so.

“All Wounds, No Hope” is a screeching chaotic swarm of various sorts of feedback with what sounds like voices trying to call out from beneath the plume of metallic scraping distortion and ray guns zapping. If you’re going to drown from power electronics textures, then this is the way to go.

Posted by Born Without an Anus at 4:31 PM