As of yesterday I’ve been informed that due to the bastards out there that don’t support bands and labels and stick to their comfort “extreme” sounds, Degenerate Slime Distro is liquidating and will no longer stock and trade the really cool rare/self-released projects from so many independent and unusually great acts. Stop ruining everything by starting small labels releasing the same shit everyone else does, with no ingenuity, that saturates everything so that it becomes harder to find the good shit among a sea of turds!!!! No wonder most shit doesn’t sell. I mean, seriously…How many Electric Wizards and Baronesses do we fucking need?!!!!!!!

I don’t mean to get emotional, but it sucks to have shit dry up and disappear simply because people want the same Sarah Lee prefab band. Take some initiative and responsibility, if you can’t support bands by buying albums because you’re “broke” but you can afford tattoos and weed then honestly “in all offense intended” you are a poser.

Anyway, here are some recent releases and great obscure finds for those of you that actually enjoy the unusual.

“Holy Shit!!!!” This is some savage and melodic death metal with some sewer death grind thrown in, I’ve never heard anything like this all in one place but sure as Hell hope to yet again. The tracks switch back and forth between deliberately vocally disfigured first hand accounts of alien abduction/encounters, telepathy, baby and cult sacrifice, and lots of late night AM radio craziness and BRUUUUUUUUUTAL razoring riffs, sometimes industrialized black metal with some thrash whiplash, other times it’s upfront death metal annihilation and very genuine old school DM. The vocals switch between heavily industrialized sewer vomit grind style and murky black metal/death metal, but it’s not random, the transition is definitely deliberate and perfectly executed.

I’m writing this based on a CD advance copy of the cassette release from VAP which has no song titles or artwork, but please take my words for it: “This is seriously fucked up and brutal death metal that needs to be heard”!!!!! There are only 25 copies of this release available so get in touch with VAP (click on the logo at the top of the page and it’ll take you straight to them) ASAP!!!! This type of stuff tends to sell out and quickly. 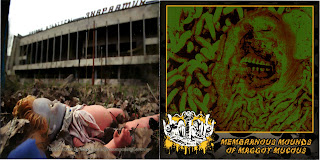 Decomposing Serenity/Vomitoma split CD (Degenerate Slime Distro)
The first 11 of 30 audio offenses are courtesy of Decomposing Serenity and YES, there are lots of Anal Cunt grind fuck madness moments and weirdo/sadistic/off the cuff samples, but DS does it differently than AC and anyone else that I’ve been assaulted by. The riffs tend to be decent and the rhythms are infectious like Chlamydia on a public toilet seat, the vocals can be AC-like or Napalm Death-like and sometimes both in a single minute long track, thus giving the classic brutal and sleazy bludgeoning sensation one would expect from the more estranged and deranged extreme death metal/grind styles. Honestly, I’d have to say that even if you’re a bit queasy at the thought of AC and similar stuff, the riffs alone on here…even with Tetris/arcade effects behind them and Donald Duck on meth vocals, still sell this one. There’s some great shit to be smelled with DS so get this, crank it, and huff it all up!!!! 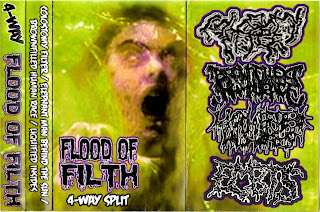 If you, like myself, are hearing Colostomy Filter for the first time then you’ll be noticing that the “Sewerplow” man behind the project has a devious and obscene sense of humor and great skills when it comes to crafting samples in with decent grindcore metal sounds. Being that this is yet another brilliant filth score from the same ingenious numb nuts that IS Vomitoma (Reclusa, Arthropox, and a million other aliases) there is some similarity between the two in terms of the use of violent and perverted audio clips, but here you get more of a Napalm Death blast beat primal metal massacre as opposed to industrialized gorenoise one gets with Vomitoma, and not to forget the humorous audio clips which will keep you laughing as your brain deteriorates further. Don’t miss out on “Oinky, the run-around-with-scissors-pig “. This stuff is great!!!!!

Elephant Man Behind the Sun is the other half of side A following CF and is a chaotic mixture of noise, fucked up and amazing experimental work, horror and exploitation film clips, and just pure random weirdness. Given that description, it’s a surprisingly easy listening experience that’ll have you amazed at the collages of sounds, laughing yourself sick, and hopefully annoying others who are not accustomed to this type of stuff. It’s a throbbing cut and paste job with the “cut and paste” feel of say Nurse with Wound but in a whole other universe consisting of over 15 ridiculous tracks of oddities.

I’ve only had this split for less than a week now and it’s already gotten about 5 hours worth of play. You just put this on, select continual playback on the tape deck, and go about your business noting and trying to remember where some of the audio clips came from such as on CF’s  “Throw-Away Guest” taking a clip from National Lampoons X-mas Vacation. Seriously, shove your head up your ass and order this one before it’s gone, there are only 100 copies and it’s something that once you experience, you’ll never know how you ever managed to live without it. 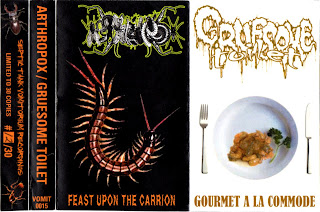 Arthropox is an insect themed horror-gore sci-fi experience and one of the best acts outside of Reclusa to do the industrialized doomy sludge atmospheres. There are 6 tracks comprising the Arthropox “Feast Upon the Carrion” side and each one leads you deeper into a gurgling cesspool of down tuned mildew metallic riffs and nuclear mutated angry insects spawning and seeking revenge. The vocals are sort of a deep gargling lion roar and growl mixture bastardized by electronic effects to yield the guttural mutant lamentations of cannibalistic insects. 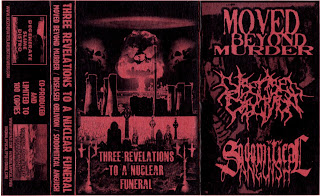 This one is a unique and horrendous beast in its own right as it compiles three disturbing and equally magnificent acts from the underground experimental/black noise/power electronic realm. Moved Beyond Murder blends a murky and slower power electronic approach with what sounds like real first hand victim statements/recounts, witness statements, and possibly 911 phone calls and public service announcements on “Don’t Tell”. Most of these are very muddy and damp due to their being drenched in rumbling low-end sonic frequencies with the occasional feedback/signal interruption added in.

After that initiation and some inevitable sense of unease “Everything that Hurt” creeps up on you with a sonic burst that soon dissipates into a haunting funeral hymn drowned in drone, underneath a bull whip being cracked continuously, and of course plenty of swirling feedback, humming, inhuman blurbs of spoken word and everything vital to creating the soundtrack to a little basement of horrors.But it doesn’t stop there,  afterward with all of that behind you, you’re now suddenly back to slightly coherent statements/confessions of perversions and sadomasochism and the track starts to wind down to a close. MBM is a genius of mindfuck creations!!!! Whether you’re a crime and /or creepy sensationalist junkie like I am, or just curious and like unusual and experimental sounds, you’ll enjoy MBM.

Track one of three, “Ghosts of Nuclear winter”, is the audio experience of having the earth rip open beneath your feet slowly, starting with a crack or two followed by a grinding burst, until a vast abyss of black death lined with thorns begins to suck you in like vacuum straight into Hell.

Last up is Sodomitical Anguish, beginning with a screeching and vibrating resonance of electrical drone and clear, coherent audio clips about serial killer profiling, weird screeching rats laughing, and more serial killers on “Deathlike Dementia”. The basis for the brilliance of “Deathlike Dementia” is in the way that the track is laid out. It is essentially this epic continually pulsing and buzzing hypnotic sonic drone with brief blurbs thrown in here and there resulting in a maximization of the mindfuck factor. I also can’t forget to mention that the two brief tracks that encase “Deathlike Dementia” perfectly lead the listener into the main track through “Preamble to Anguish” and also bring a haunting and subtle close to the main track (and album) with “The Samaritan”. Sadly this is the only SA work available to date, but the mastermind behind it is active in other brilliant projects so all is not lost.

At heart, SA is noise ambient, very hypnotic and fairly dense, but less harsh and intense in frequencies used leaving a reliance on building atmospheres and composition of each sinister element to completely scare your skin right off your body. Although seemingly soothing at a distance, SA will still impart a sense of unease with each listen until you listen to it enough times that you can predict the outcome.

Three debauched acts, one single cassette with the comp repeating on both sides for around $4 or so, and variations on depravity and mind fucks that to even the seasoned listener can still develop some sense of amazement. Whether you are a new or chronic audio deviant, this tape is for YOU!!!!!

Already sold out form VAP, but still available (I think) from Degenerate Slime Distro.
Posted by Born Without an Anus at 9:35 PM