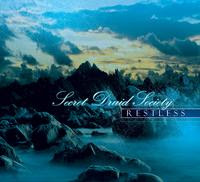 Opening up with the appropriately titled “Deserted World”, SDS illustrates imagery of the beginning of the universe, right after the initial violent eruption that led to the creation of all matter and the universe as a result. The ambient drones allude to the sound of an object in projection but retarded to a speed of liquid bead of viscous tar as it almost hovers past you.

The sense of aimlessly drifting in a state of uncontrolled motion and being only directed by the natural compulsion of the space around you is continued into “Restless”, as the highly entropic state of the universe is pure chaos, but the type of chaos that is pure freedom and riding a natural flow. Although the sounds contained within Restless as an album are hypnotic and cerebral, they do convey a sense of darkness…mystery, and even an eerie quality that could very well be describing absolute chaos as one would hear it if they were right on the cusp of being consumed by a black hole.

Right before entering a black hole it is speculated that everything slows down to the point a complete stop and to an observer next to you it’d appear as if you were frozen in that position for ever although you’d been long since removed from existence in the gravitational pull and “Lonely Moon” captures that odd sense of watching something freeze at the brink and remain that way as you do for an uncertain length of time that could be considered forever.

“Phobia (Stones are Moving)” is the ironic truth of the situation told through sound as particles in the universe continue to divide and collide amongst each other for billions of years and your existence was brief and almost meaningless in the whole situation. Things continue without you and the only memory of you is a snapshot carried by some sort of radiation of your final moment.


“Restless(Night is Here)” is a 15 minute drone drift through astral planes where the synth waves reverberate over you like time freezing to a pause, you can almost feel the lethargic chill from the wake of some sonic occurrence across your skin as this track makes it tingle.

“Dawn Over the Deserted World” represents your landing on the terrestrial surface of some ancient looking planet. There’s a distorted electronic flute serenade guiding your eyes across the horizon and a sense of tranquility and conclusion are now felt within.

“Endless Ice Planes” moves past slowly and heavily, as if you’re standing at the shore or on a cliff overlooking an alien turquoise sea and hear the sound of monolithic crystallic ice mountains as they crawl past you. If there was a sound for time at an almost stand still velocity, this track would come very close to it.

For audio samples and ordering:
http://www.firstfallenstar.com/main.php?releases&mn=1
Posted by Born Without an Anus at 9:16 PM