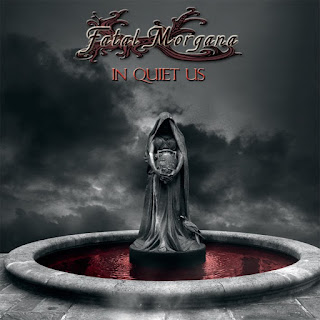 I’m sure many of you already can see where the influences in this one lay, one of my favorite metal tracks of all time off of Fates Warning, Awaken the Guardian, but don’t blindly expect FW here as this band has it’s own prog metal skill and style that is extraordinary in itself. Hailing from Hellas Greece this power prog metal bands 1995 2 song Demo (hailed as a monumental release back in the day) and previous unreleased Windfall album from 1996 are finally seeing proper release as In Quiet Us this month on Arkeyn Steel. I’m a huge prog head and there’s definitely Fates Warning here, but I actually more of a heavy melodic prog album with epic metal leanings. Everything about this band is the big pink elephant in the room named PROG, you can’t miss it and you certainly fucking love it…BUT it’s 100% classic epic metal as well so don’t expect anything less than that.

“Close at Hand” opens the album up nicely with a total Awaken the Guardian like heavy prog metal track. The guitars shred and chug along steadily to give it a bit of aggression as the rhythm itself noodles around behind it as a free flowing amorphous entity, no predictability, but absolutely smooth throughout. You can hear the bass notes as they walk through the direct the curvature of the song structure, nice and clear along with the leads and drums, the production is so clear that you can see straight through the mix and capture each instrument equally.

“In Speechless Words” continues with the FW comparison in vocal sound, but toward the last half of the track they bust out a guitar jam that has an almost gypsy/flamingo time signature and it just totally stops your heart for a moment to go “whoa” and gasp. This is definitely an audio treasure to behold, there’s nothing here that’s standard or been done before, this band definitely stands out!!!!!


“Tempest” is the album closer and is a heavy metal version of classic prog with the theatrical and eerie vintage organ intro reminiscent of old horror soundtracks, I totally hear Antonius Rex, that streams into a killer guitar arpeggio and semi classical vintage synth piece before being blasted into a heavy prog assault. Only 6 minutes, but screams out as a more modern version of the essential: Malombra, Antonius Rex and L’Impero Delle Ombre sound.

Keep an eye out for the re-release of The Last Things rare 1993 album, Circles and Butterflies” if you dig Watchtower and Psychotic Waltz as I do, Arkeyn Steel will be unveiling that in the near future.

www.arkeynsteel.com
Posted by Born Without an Anus at 9:24 PM