Excruciator – By the Gates of Flesh (Heavy Artillery 2010) 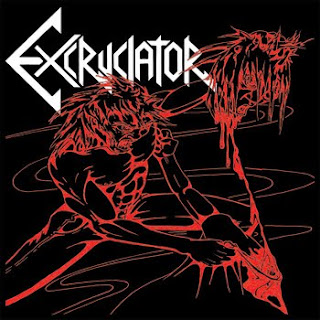 I recently made the public announcement in my review of the pretty impressive new school thrash act Vindicator that I’m not big on the new wave of thrash, well…as with most things there are exceptions to the rule and Excruciator is my exception. I really like this label and many like it who prevail to release some of the freshest cuts of metal flesh, and now they are releasing their "Heavy Artillery Wax Maniax Demo Series" featuring mini LPs and cds of some of the coolest obliterating metal sounds today, so for the oldschool heads out their, check that out for sure: http://store.heavyartillery.us

Now for this release, it’s vile, aggressive, colossal and just guts you like a pig ready for the roast with it’s gruff raw death/thrash vokills and unrelenting guitar stabs and jigsaw rip cuts of chords. As with many bands on the label there’s a good amount of progressive rhythm changes to give each track a sophisticated and swerving quality as you are tossed through the tracks like breakfast from your stomach due to a bad hangover. I would be willing to actually bet a few limbs that the first listen to tracks like “Nuclear Exmortis” and “By the Gates of Flesh” you will be climbing the walls as your jaw drags on the floor behind you from your initial, FAAAAAAAAWKKKKKKK!!!!!!!!! response as this thing knocked it clean off the hinges. I HAVE to have this animal in my collection and living with a grouchy old punk, I think he’ll be more appreciative to hearing this thing alongside my Blood Feast and Nuclear Assault blaring then the doom stuff. Bow down to the power contained here, this shit will annihilate anything within 1000 miles of its sonic epicenter!!!!! You MUST have this!!!!!!!!!!!

Audio Samples and band contact:
http://www.myspace.com/excruciator1
Posted by Born Without an Anus at 11:51 AM