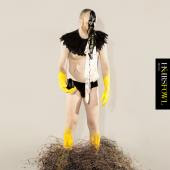 Heirs are yet another psychedelic, instrumental rock band who are well versed in improvisation skills and the perfect use of electronic effects to create a densely sweltering environment through pure creativity and rhythmic flow. The thing that really makes this album stand out for me, aside from the amazingly tribal and ritualistic rhythm/drum patterns used throughout, is how I start the album and before I even realize it the album is over. It literally captures your mind and zaps you into its universe and you really never pause because the ride just keeps you going through turns, loops, intensity, volume, and speed changes so you never get the chance to really stop.

It’s the coolest and weirdest thing, that’s why it’s taken me about two weeks or so to write this review, every time I sit down to review it I get caught up in it and lose track of time and place. You have to hear this whole thing in one listen, you could try to break it up and it’d work, but if you don’t have it uploaded and on a sort of shuffle feature where there’s outside control you’ll never make it through only partway, it’s that solid and consistent!!!!! Seriously, for those who dig the total mind melting, heavy rhythm, jam, tripped out stuff…YOU HAVE TO HEAR THIS!!!!!!

“Dust” opens up with some ambient/moderate effects, a smooth bass line and high hat to give an almost jazzy and lounge sense to the album, but just as you think you’re safe the guitar picks up some weight and the drums bring in the stomp and pummel and before you know it, the room begins to spin and your heart pounds.

“Fowl” comes in subtly to a tribal rhythm n drums and a looming sense of entering into some unknown place, some sense of uncertainty is present and the deeper you traverse into this labyrinth of sound, the sweatier your palms get and the lighter your head gets. By about the halfway point of this elusive journey you’re fully entranced and your heart even beats to the drum rhythm. After this everything becomes one big sonic blurb of pure reverb and psychedelic textures and you really don’t come back to reality until you go down the drain at the end, aptly titled “Drain”.

“Burrow” and “Tyrant” represent the den or hive in which you’ve now entered, the clicking and echoing of the percussion and the humming and buzzing of the bass denotes that you are closing in on the central layer of this mysterious lair you’ve somehow wandered into. The buzzing of the inhabitants, alien and yet familiar to you in some way as they are just synth and guitars distorted into a new language of tones, but having the same purpose as your familiarity leads you to believe. You’re now swarmed with instrumental psychedelic meanderings and cannot see past the end of your nose form the sheer density of this audio buzz.

“Men” -Like a tornado of sound that makes the whole world spin around in a frenzied cyclone to the tribal drum beating of ones demise. The drum sound is almost hollow and ritualistic as the swirling of distorted guitar winds sweep your consciousness away into the eye of this storm.

“Mother” a laidback sonic reverberation of modern psychedelic and feedback reminiscent of Pelican and new comers Del Rey. This is where the storm has settled and you regain solid footing to find that you are unscratched from the riotous wind tunnel ride you were on only moments before, but you now have the odd sensation that you wish that it would happen again and right at that very second.

“Drain” enters with a lovely reverb guitar intro which then leads you unknowingly into a warm cataclysm of vibrating, seismic hazes of guitars saturated in effects to drown you by the end of this 6 minute throb of circular rhythm patterns. Imagine watching the water in a tub drain very slowly as it circles and spirals around the opening before plummeting through and that’s the sensation you get on here, it starts out slow bit as you get closer to the opening things speed up to a wild vortex that’ll be sure to spin your head around a few times during the listen.

There you have it, and it took me three forcing listens to break it up because I kept missing it as it just consumed my mind altogether. This is one more piece of evidence that the wave of good instrumental, effect and jam laden rock talent has not lost it’s amplitude, it’s only getting started!!!!!

Essential for most, but fans of the following will already have bought this by the time they got halfway through my dissection of it: Boris, Hellas Mounds, Isis, Neurosis, White Hills, La Otracina, US Christmas, Red Sparrows, Del Rey, The Heads, Pelican….

Heirs contact:
http://www.heirs.com.au
Posted by Born Without an Anus at 3:18 PM