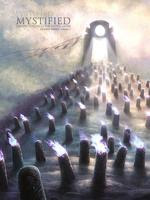 Yet another essential release from newest collaborator, First Fallen Star, and a unique perspective from the musical perspective of death, Thomas Park (Mystified) sets out with this release to capture the experience of death from his angle and does so brilliantly.

If you imagine the experience of death as an ethereal transcendence, nothing violent or demonic, depressing or pessimistic, then you’d be in perfect agreement with Mystified’s post mortem atmospheres. Somewhat neo-classical and space ambient, Mystified paints images of eternal drifting and cosmos on top of a fairly minimal and spacious background. Each track sort of echoes and ricochets through a massive tunnel of space-time as would the soul as it journeys away from the mortal body into the absolute oblivion. If anything can convincingly illustrate the sort of Nirvana to be found beyond Earthly and mortal constraints it’s Mystified with Passing Through the Outer Gates. These are some seriously moving compositions!!!!

The album packaging is equally intricate as it’s presented in an A5 digipak with silver foil embossed lettering and a specially die-cut cover with a coffin shaped hole that reveals a small fraction of the awesome album artwork that lies underneath. There’s some serious care taken in each release in terms of artwork, packaging, and of course…the sounds.

Purchasing info and audio samples:
http://www.firstfallenstar.com
Posted by Born Without an Anus at 9:49 PM