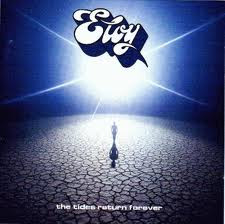 Dense Vision Shrine is yet another artistic character embodied by Karsten Hamre and a simultaneous release on First fallen Star with his self titled acts FFS debut Through the Eyes of a Stranger. The title of Time Lost in Oblivion couldn’t have been better chosen for this release as the sounds herein sound as ancient and drifting as they do completely otherworldly.

Each track captures some alien world field recordings and then morphs them through a moderately warm and distorted ne-classical medium. The metallic clanks serve as a backdrop to the vortex of soft ambient hums and whirrs that circulate about your brain like a skilled hypnotist. Each track is stark, barren, isolationist drone, but never without any presence of life.

The tracks remind me of the image from Eloy’s The Tides Return Forever, where a man stands in solitude on a parched and cracked planet’s surface staring into oblivion as a gigantic beam of white light glares out at him from the center of the universe. That image exactly sums up what you will experience through Time Lost in Oblivion.

For purchasing:
http://www.firstfallenstar.com
Posted by Born Without an Anus at 9:24 PM