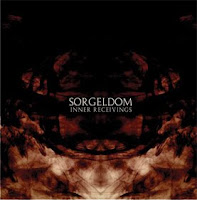 When I heard about this album it was marketed as Black Thrash mixed with Shoe-gaze, which turned my attention toward it out of curiosity, but it’s completely different than one would expect given that description and the result is an astoundingly beautiful one. I want to say that it’s a perfect blend of all of the above-mentioned bands, which it is, but that’s not very fair so I’ll try to think of a way to do it so bear with me. I really wouldn’t call it shoe-gaze either, it’s spacey and dreamy like a lucid daydream on a rainy afternoon in spring that suddenly takes a tragic turn. The clean vocals are elegant and sound almost as if they are haunting you from behind the music that resembles Alcest/Lifelover passages of soft guitar that become intertwined with the characteristic atmospheric buzzing of black metal guitar tones and effects somewhere along the musical path.

The tracks very from almost bleak and forlorn arpeggiated folk melodies to a stripped down black metal fuzz with some classic blistering tempos appearing in spots without losing any of the original emotional depth. You can feel as if you are completely alone and wandering on foot through a dense European wilderness with only your thoughts to keep you company and your breath to remind you that you are still alive. You will hear so many similarities to other groups that we all love in this band, but it’s this style that never seems to wane and manages to be that refreshing chill that you get when you take your first breath of a cold and biting winter wind.

This is as much for the: neo-pagan, neo-folk, martial, Cold Spring, Ahnstern, Sturmklang, Tesco, Old Europa café, War Office Propaganda listeners as it is for the lovers of black and atmospheric metal. This stuff bends stereotypes and stale sounds and imagery, pumps them full of new blood, never runs from sophistication and demands strength and perfection. It’s also colder than a witch’s tit, so the saying goes. Cold, tragic, and barren, a story of loneliness and the internal hauntings of ones own trials and tribulations.
Posted by Born Without an Anus at 10:03 PM