Deliria - Children of The Darkness (self-release 2009) 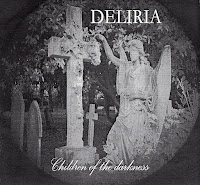 I have to start this out by stating first and foremost that, “I’m a massive Italian doom fan “: Paul Chain, Abysmal Grief, Death SS, Black Hole, The Black, Zess, THC Witchfield, Arpia, etc. So here’s the low-down on this underground Italian Psychedelic/Prog Doom project and this EP. These guys have been going for a decade now, released 4 EP’s including this one, and did flawless covers of some Black Sabbath tracks that honestly immaculate. This is the true doom sound right here, it’s just as psychedelic and 70’s blues doom and metal as it is prog doom, and it’s only two guys!!!!!!! Francesco Gallo on lead and vocals alongside Ivan Ritrovato on Keyboards.

Okay, it’s only two guys and no drummer, but here’s the catch… you couldn’t even tell unless you were closely looking for it and even then I’d dare to call your bluff. This band sounds soooooo much like a Black Widow Records release, Italian doom and horror metal classic that to not think Paul Chain would not only show insufferable ignorance but should result in your being cast out of existence, or worse yet you’ll be cast into listening to rap, pop country, and teeny bopper shit. I challenge anyone out there into doom and psyche to not dig into this bands sound like vultures on an anorexic teenager, you won’t be able to escape the gravity pull on tracks like “13 Witches”.

As with anything in this style of doom, expect to be sucked into this black abyss of ghostly hymns, cosmic guitar solos that encompass you into a world of black occult psychedelia, and classic warm analog riffs. This stuff is lava lamp and occult acid trip doom, in a vault secretly hidden in the catacombs of the ancient burial grounds beneath the modern city. It really gets close in sound to Paul Chain’s: “Sign from Space” and “Park of Reason”.
I always buy promos and self-releases from underground bands like Arpia and several others of this style, so don’t pass this up because it’s not a fancy copy. That’s bullshit, if the talent is this damn good you should be begging and scrounging for change to pick this up. This is as mystic and eerie in parts as it is doom and all around completely FUCKING awesome.

Essential for fans of anything mentioned so far: Solitude Aeturnus, Candlemass, Dark Quarterer, Black Widow, Lucifers Friend, you get the idea. Check out the link to hear the audio, most of the info on their website/s is in Italian, but all you need is the music and to send them a message and they’ll gladly get back to you, they found me to start with so they can communicate effectively.
http://www.myspace.com/deliriadoom
Posted by Born Without an Anus at 10:18 PM