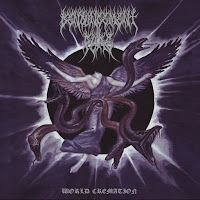 And the Blackened- Death metal conquest continues for total domination of the underground!!!!!!!!

This Australian beast of blasphemy and hatred is bringing to our hungry ears another piece of unadulterated filth and fury courtesy of Hells Headbangers Records. To me “World Cremation” is another perfect mutant hybrid of black metal, death metal, and thrash metal. You get the thrashy almost Hellhammer-like riffs and rhythm, but you get the low-end bomb blast rumble and aftershock of doom and destruction from the guitar tones along with the shredding “squeal like a fresh hog getting it’s throat slit” that harkens back to early Death metal days. As for being Black metal, which is a sort of glorious bastard child of thrash, shock value, and a need to vent and destroy anything unworthy, so this band fits into that box nicely.

This blackest thing about this band aside from their ideals is the soot of charred remains of things considered pure and sacred that they leave in their wake. This maelstrom has been around for close to a decade, gone through many line-up changes, released successful and promising sounds to wet our appetites for their future unveilings of diseased intentions, and has now finally grown into a mature sweltering heat wave of Hells force. As refreshing for myself as it is offensive and fear inducing to many naïve and weak sheep, this is yet another storm of death complete with winds of holocaust to further plague our lives this year. Worshippers of violent murder and the morally corroded rejoice and partake.

Fans of: Profanatica, Prosantus Inferi, Church Bizarre, Inquisition, Deathspell Omega, Dead Congregation, Bestial Mockery, The Royal Arch Blaspheme, and Sacrilegious Impalement will be especially delighted with the sound of this one.

Band Contact: http://www.myspace.com/denouncementpyre
Posted by Born Without an Anus at 11:23 AM